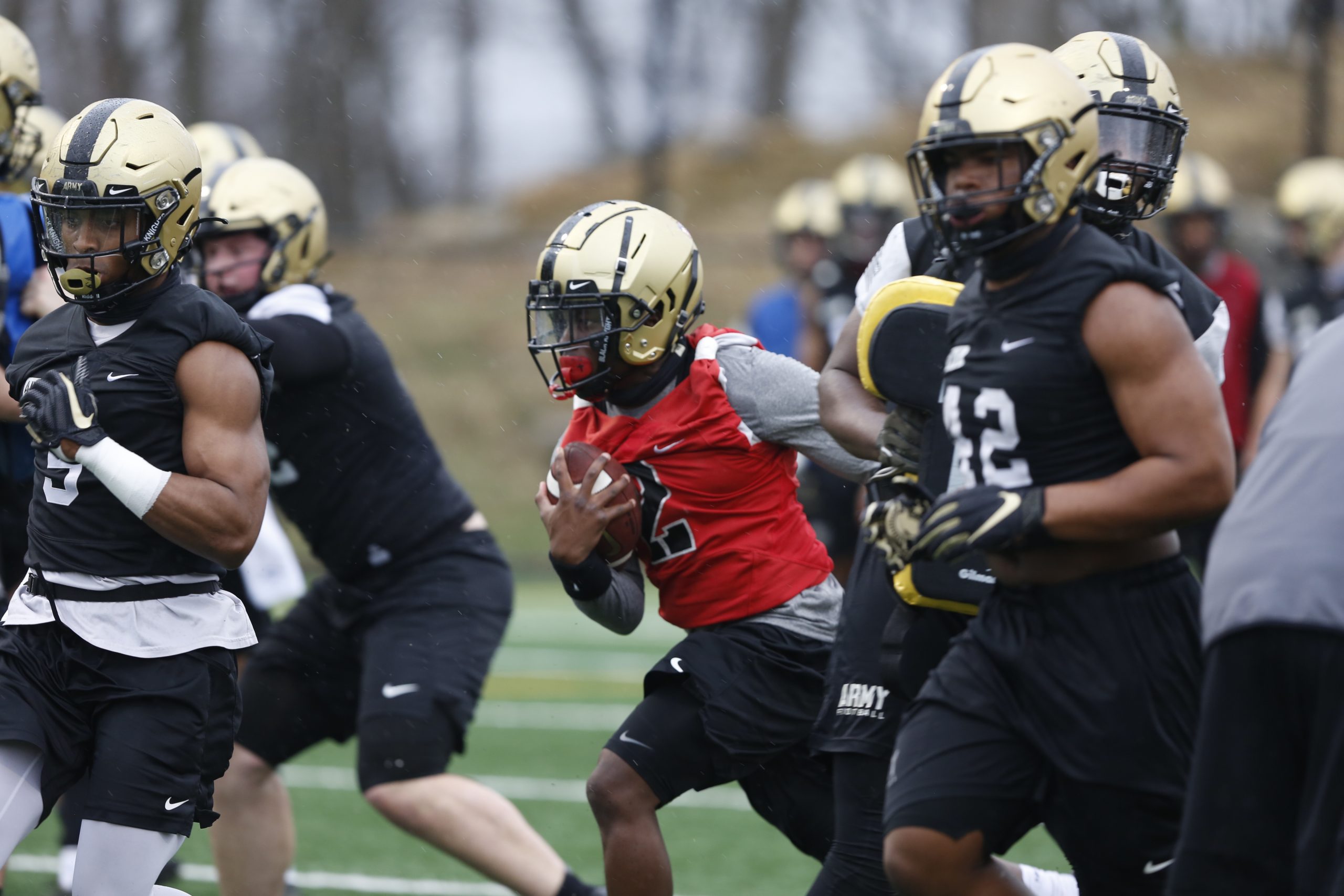 Tyhier Tyler’s drive and leadership is revered by his Army football teammates and the coaching staff.

Tyler, a rising junior quarterback, describes the qualities as, “a winning spirit.” It’s a mindset that surfaced early when he started playing football at five years old in Newport News, Va. Tyler wanted to win neighborhood games. Older kids come by Tyler’s house and ask him to play.

“I didn’t really like losing in a lot of things not just football,” Tyler said. “We could be playing UNO or Madden. I just don’t like losing. I think all of that transfers throughout life.”

Tyler’s winning spirit was on full display against Georgia Southern last November. In his first college start, Tyler struggled early as Army trailed by 14 points at halftime. Tyler’s never-quit attitude and fight helped will the Black Knights in the second half to a one-point win.

Wins against service-academy rivals Navy and Air Force, securing the Commander in Chief’s trophy, would follow. All that success was accomplished from a condensed triple-option playbook with predominantly fullback dives and quarterback zone calls. No pitches. And, limited passing plays.

Tyler didn’t take his first practice snap at quarterback until the week of the Texas-San Antonio game in mid-October. He was taking snaps at slotbacks in the preseason before an injury sidelined him.

“I have always seen myself as a quarterback,” said Tyler, who led Army with 570 rushing yards in seven games last year. “Even getting recruited, I looked at places that ran the option like Navy, Army and Georgia Tech at the time. I’ve always seen myself as a quarterback and that move to slotback was to get me on the field. I like having the ball in my hand and I told coach (Jeff Monken), “I just want to get on the field and I’ll make the switch and I had a real good chance and then the injury happened.”

Tyler finished Army’s 9-3 2020 season as the starting quarterback and he’s brought that mentality into the team’s spring practices. Christian Anderson, Cade Ballard and Jemel Jones, who are started and won games last season, are pushing Tyler and each other.

“I feel like everybody wants to be the guy,” Tyler said. “I feel like everybody is competing to start. My biggest chip is the coaches know what I can do on the ground. They know I can be elusive and I’m a tough runner. But my biggest emphasis was throwing the ball. Each guy has those things that they need to work on to be that guy. Feeding off each other and that friendly competition allows us to get better in those aspects and Coach (Cody) Worley has done a great job coaching us too. Everybody wants to be a starter. Definitely coming into next season, I feel like I can do but so can the other guys. So. it’s just competition.”

Tyler and Army’s quarterbacks compare the competition to that of Jalen Hurts and Tua Tagovailoa at Alabama a few seasons back.

As spring practice grows closer to the Black and Gold game on April 30, Tyler continues to work on his passing game. In the offseason, he spent the weekends, throwing with teammates. Army attempted just 76 passes in 12 games last season. But, Tyler wants to give opponents another element to defend when he’s in the game.

“The season before last (2019) I didn’t play,” Tyler said. “I had some academic issues. I didn’t really play so I sat a whole year. When you sit a whole year, you get a little rusty and when I got back, I was playing slotback. I always knew that I could throw the ball but not having to do it in a while I had to knock some rust off. I’m getting it back and every day, I’m throwing a lot at practice and I’m seeing a lot of improvement and hopefully getting the confidence to be able to throw a lot in games this fall.”

If Tyler wants to get another perspective on his progress, he’ll reach out to his first coach – his father, Anthony.

“Everything started with him just doing drills in the backyard,” Tyler said. “He still coaches me up and tells me things I need to work on.”