Nicolas-Paul steps up in scrimmage 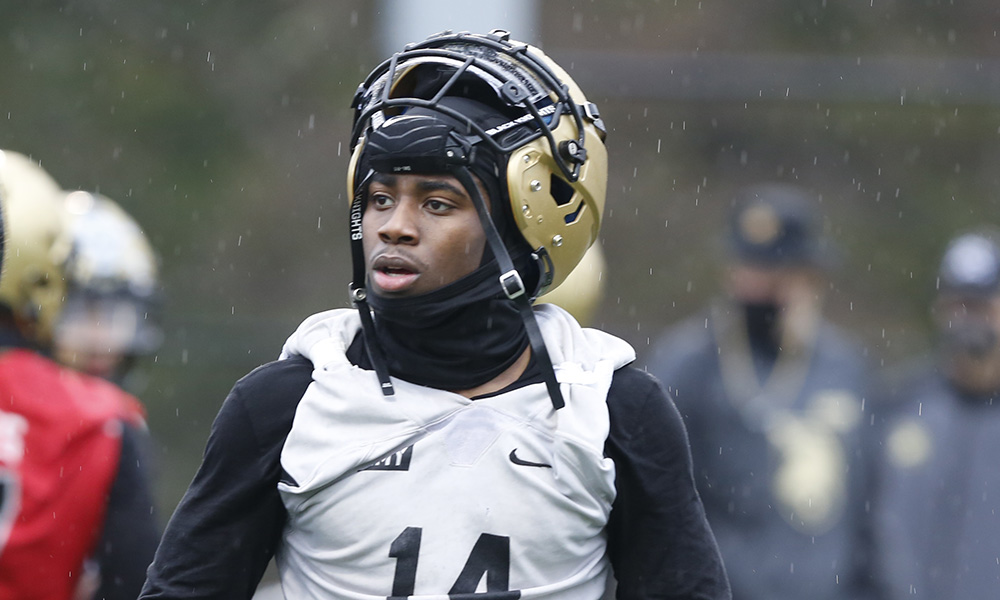 Army’s first official spring scrimmage provided an opportunity for younger players to step up and impress Jeff Monken and his coaching staff.

Freshman cornerback Bo Nicolas-Paul took advantage of that chance. Nicolas-Paul returned a kickoff for a touchdown and picked off a pass in the red zone Saturday morning.

“It was a whole lot of fun being out there with my brothers, being evaluated and playing some tough football,” Nicholas-Paul said.

Nicolas-Paul, who played on special teams coverage late in the 2020 season, is competing at one of Army’s deepest positions. Cornerbacks Jabari Moore, Julian McDuffie, Cam Jones and Caleb John all started at one point last season. Nicolas-Paul was timed as the third-fastest skilled player during the scrimmage.

“I’m a part of a very talented position group,” Nicolas-Paul said. “We have a whole lot of studs and a whole lot of talent and as a young kid, I’m just trying to soak in everything I can from each one of them and just give my hardest day in and day out to contribute to the team.”

Many experienced players, including linebacker Arik Smith, defensive linemen Nolan Cockrill and Ryan Duran and safeties Marquel Broughton and Cedrick Cunningham, were held out of the scrimmage.

“We pulled some guys that have played a lot for us and didn’t put them in the scrimmage at all,” Monken said. “I don’t think there’s really any need to at this point in their careers.

“We didn’t have necessarily the ones against the ones or the twos against the twos. We were just trying to play as many guys as we could, get them evaluated, give them a chance to be out there without any coaches. For a lot of them, (they were out there in) the game-type experience or game-type environment for the very first time in their careers.”

“They (Tyler, Anderson, Ballard, and Jones) have all played obviously and no need for them to go out there and get tackled,” Monken said. “You get a chance to see them (Bellan, Purcell and Curtis) really run the ball with people tackling them. All of them got reps and they all did some good things and have some things that they need to improve on.”

House call: Fullback Wilson Catoe, who is making the move from linebacker this spring, scored on a 15-yard run.

“He’s a physical guy and plays with such a great motor,” said Monken of Hill, who was the 2019 Tennessee’s Mr. Tenneessee in DII-AA.

Sophomore Cole Mabry has switched from safety to the hybrid Apache position this spring.

“He’s a long guy, bigger, physical and can carry some weight,” Monken said of Mabry. “He probably doesn’t possess the skill set that we felt like was going to get him in the mix at safety, just speed and the skills in space. We get him smaller spaces. He is a physical, strong kid and I think that’s going to be a better fit for him.”

Held out of practice: Slotback AJ Howard, linebacker Spencer Jones and apache Malkelm Morrison were among the players that are knicked or banged up and didn’t participate in the scrimmage.

VIDEO: Bo Nicolas-Paul on making big plays in scrimmage and his development as cornerback

VIDEO: Cole Mabry on his move to linebacker and what attracted him to play football and attend West Point