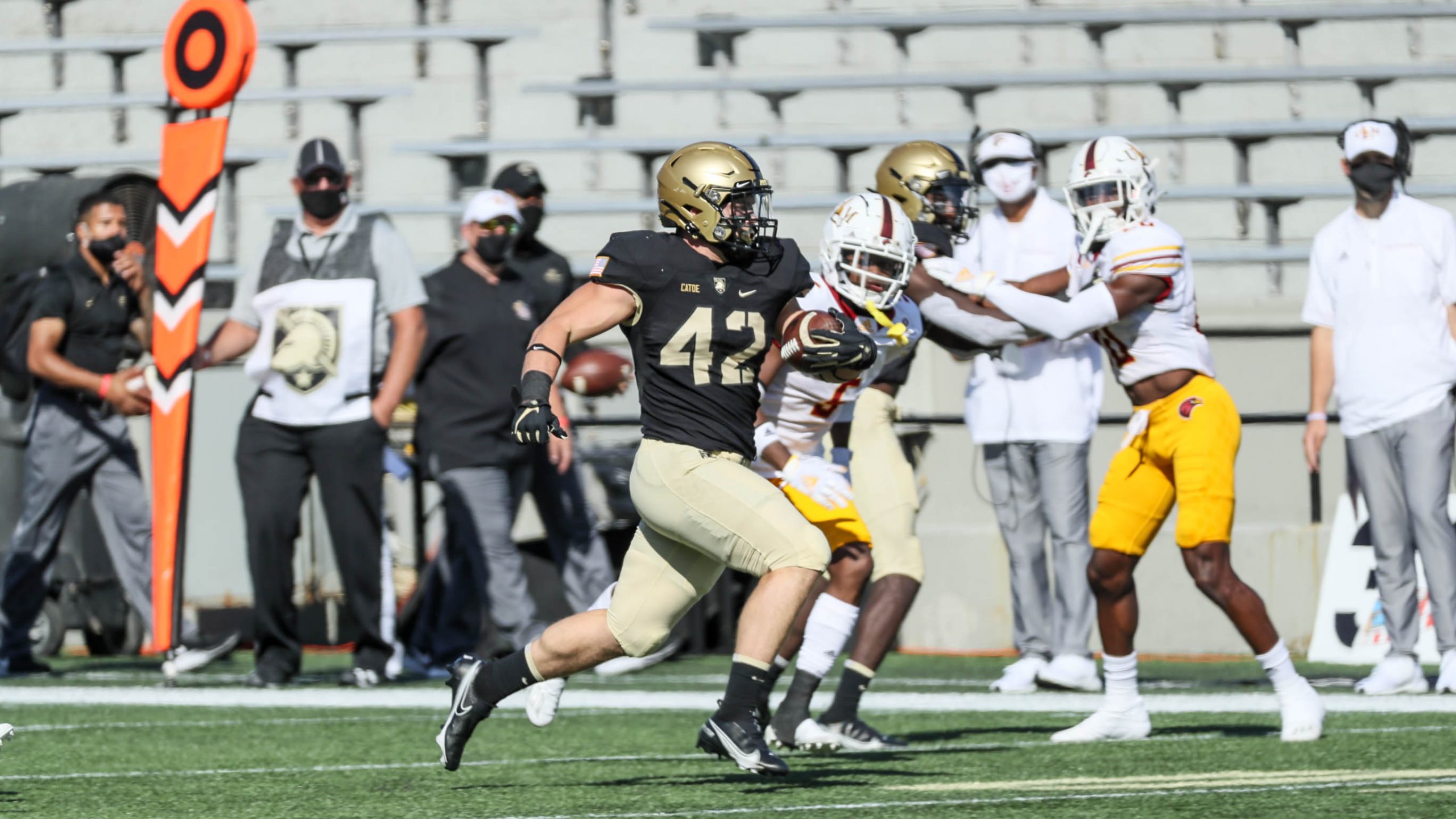 Wilson Catoe may have provided a glimpse of what Army fans might see in 2021 on a trick play against Louisiana-Monroe last September.

Playing as part of the punt shield, Catoe took the direct snap and broke out for 47 yards. The run was Army’s fourth-longest of the season and may have sparked some conversation to a position change this spring.

After three seasons at inside linebacker for the Black Knights, the 6-foot-2, 248-pound Catoe is now a “War Horse,” or a member of Army’s stable of fullbacks.

“The change is going great as of right now,” Catoe said in an interview with Black Knight Nation after Monday’s practice. “It’s very fluent. It (fullback) has a lot to do with built-up speed and aggression and I feel like that’s a pretty easy transition from inside linebacker.”

Before offseason workouts started, Catoe met with fullbacks coach Mike Viti and inside linebackers coach Shiel Wood to discuss a potential switch. The coaching staff along with head coach Jeff Monken was on board with the move and believed it could help Army for the 2021 season. Fullback Sandon McCoy, who led the team with 10 touchdowns, was graduating. B-Backs Anthony Adkins, Cade Barnard and Jakobi Buchanan are returning after combining for 895 yards and 11 touchdowns.

Army likes to keep its fullbacks fresh and Catoe can provide depth with emerging freshman Tyson Riley. Catoe could also be a short-yardage option, which would take him back to his days at Peachtree Ridge High in Suwanee, Ga.

“I played a little H-back in high school during heavy-package personnel where we were probably in red zone or goal-line situations, very similar to Army’s style where you are either getting the ball in short yardage or you are lead blocking,” Catoe said.

“Coming into West Point after Beast Barracks basic training, I was about 210-212 pounds,” Catoe said. “Basic training shredded a lot of weight off. Ever since then coach Hess (now at North Carolina) was my strength coach freshman year here, he did a great job. Coach (Conor) Hughes has stepped in as head strength coach these last three years and that’s a helluva guy. I love that guy. He always is bringing a lot of energy into the weight room.

“I’ve dedicated myself to the weight room and eating right and that offseason work to the side. Ever since then, I gained about 40 pounds. I’m sitting at 248-252. It ranges with water weight. There’s been a big jump in regards to my lifts while still keeping my speed up there and my agility. It’s been a main focus for me in college and I’m glad it’s paying off right now.”

A strong connection with Davis guided Catoe to West Point. Catoe originally committed to Harvard. Davis recruited Catoe for Army and paid multiple visits to Peachtree Ridge. They shared a common bond with their love for Georgia. Davis attended Duluth High School “about four minutes” from Catoe’s home and played tight end for the Georgia Bulldogs.

“Coach Davis always provided that homey feeling,” Catoe said. “He was always at my house and visiting my school. I really loved coach Davis and everything he brought to the table recruiting-wise. Things didn’t work out with Harvard and I knew where that wasn’t where I wanted to go in my recruiting game and I knew my home was with 100-plus brothers that I would meet in the future.

“Coach Davis was always there for me from the start. I knew he was somebody that I could rely on and he wasn’t providing a false scenario of what college football was going to be like. He was always there and he was straight forward and it was something that I really appreciated going through high school.”

Now, Davis is Catoe’s offensive coordinator for his final spring as an Army football player.

“We’ve always had that hometown bond and he’s a great guy and even better coach,” Catoe said.