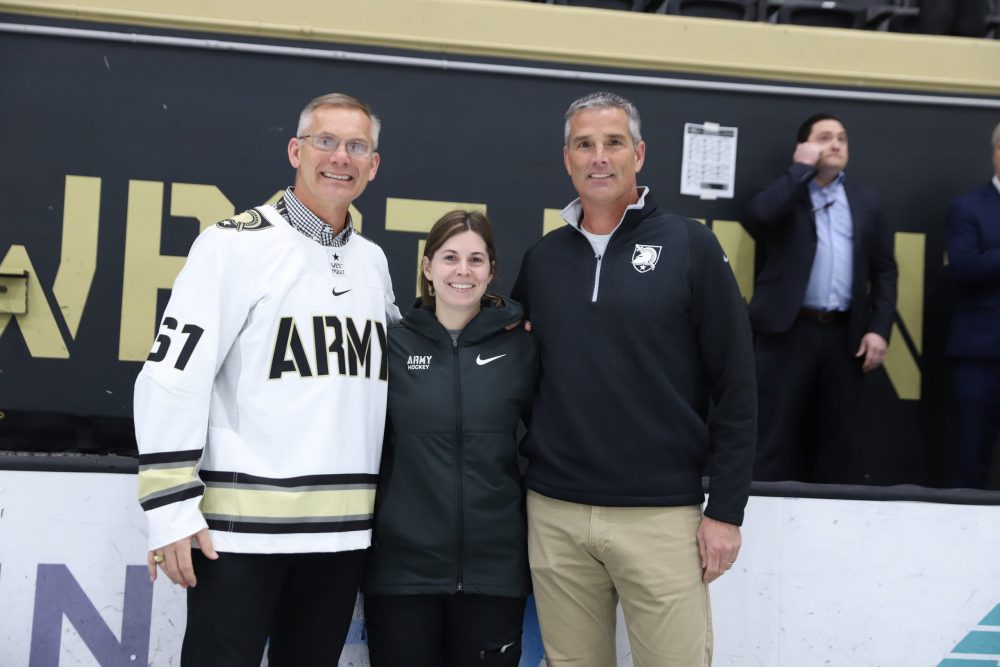 Army hockey players lined up on the ice for a pregame ceremony prior to Sunday’s home game against No. 11 Providence.

The ceremony wasn’t about goals or wins on the ice. It was about celebrating a real-life hero.

Rachel Leahy, the team’s athletic trainer, was honored for her immediate first aid to Army junior forward Eric Huss after he took an inadvertent skate to the neck in a game against Sacred Heart Thursday. Leahy applied pressure to Huss’ neck until an EMT arrived.

The crowd of 2,214 fans gave Leahy a standing ovation as she stood next to West Point superintendent Steve Gilland and athletic director Mike Buddie. A message from Huss played on the video board.

“Thank you for how fast you reacted to stop all of the bleeding,” Huss said. “I wouldn’t be around to be able to say this but thank you from all of my heart. You saved my life truly. I couldn’t be more appreciative.”

Atlantic Hockey named Leahy their player of the week Monday. Army coach Brian Riley said in a pre-recorded radio interview before the game that the emergency surgeon said if Huss “got to the hospital 10 minutes later that he wouldn’t have made it.”

The Black Knights won one for Huss Sunday with a 2-1 shootout victory over nationally-ranked Providence. Gavin Abric made 38 saves including the game-sealing stop of a penalty shot.

Huss was able to visit his teammates in Army’s locker room Saturday.

“I think it was just an emotional uplift,” Riley said in the postgame press conference. “I don’t know if a lot of people realize but the meeting that we had the next day (after Huss injury) could have been a total different meeting if it wasn’t for Rachel. It was great to get the win and have him be a part of it.”

Joey Baez scored two goals including equalizer on the power play in the third period for the Black Knights (6-11-3).

“This is a game that I told the guys that you are going to remember forever,” Riley said. “There’s probably not anyone in the hockey world that thinks we are going to win this game. But, our guys believed.

“I have to give the fans huge credit. The atmosphere in here was amazing.”