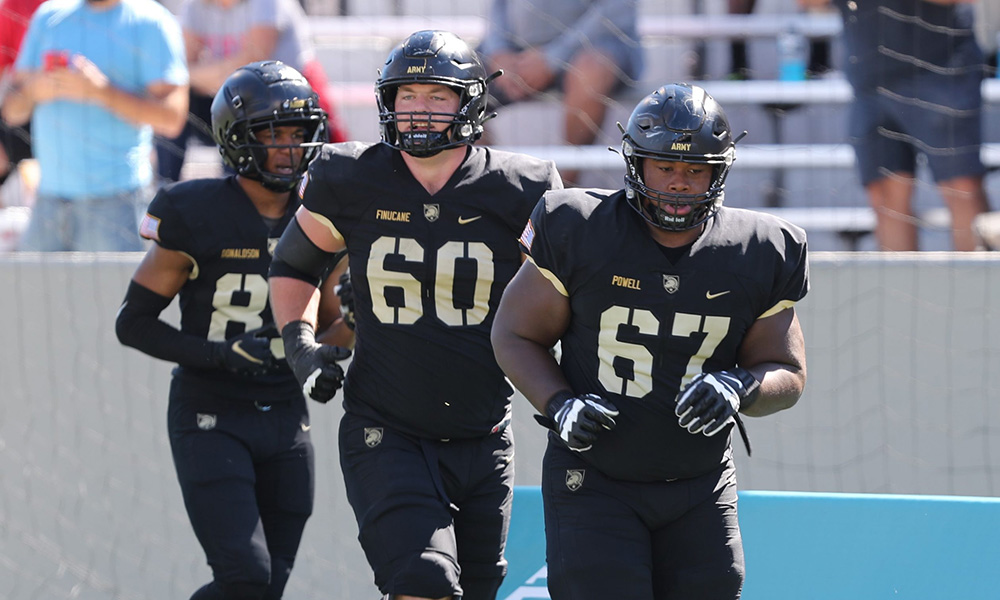 Connor Finucane drives a defensive lineman backward with ease opening, up the space for Army’s fullbacks to plow through.

There’s something about the one-on-one matchup that brings out the best in the sophomore.

Maybe, it takes Finucane back to wrestling days at Catholic High in Baton Rogue, La.

Finucane credits his hand fighting and leverage to the sport that he captured a state title in his senior season.

“Fundamentally, wrestling is an extremely physically difficult sport,” said Finucane, who has started Army’s first four games. “A lot of it carries over to offensive line play. You use your hands, hips and leverage and you can control another person against their will.

“It’s the grind of practice in wrestling. It’s just a grueling sport and if you get through it, you are automatically tough guy.”

Army offensive coordinator Brent Davis witnessed that toughness first hand during Finucane’s recruiting. Finucane had broken his ankle and was on a knee scooter when Davis saw him in the school’s hallways. Davis asked where Finucane was going. Finucane answered, “Wrestling practice.” Davis thought Finucane was going to watch practice. Finucane took off his boot and hit the mat.

“He’s very mature as far as his work ethic for his age just being a sophomore with the way he carries himself, his competitiveness, the way he approaches practice and the way he prepares for a game,” Davis said. “I think he’s just maybe beyond his years in terms of the grit that he shows every day and just his mindset.”

Army coach Jeff Monken watched one of Finucane’s wrestling practices. The only person that could hang with Finucane was his high school coach.

“It was literally a street fight on the mat,” Monken said. “He’s tough and rugged. I just really admire that quality about him. Connor is a guy that came in physically ready. He is really strong. He’s extremely tough.”

Where does that toughness come from? Finucane said he’s had a chip on his shoulder since the passing of his father in 2014.

“(It was) just me and my mom growing up,” Finucane said. “I had to grow into my own man. I would always play aggressive contact sports with wrestling and football. I always had something to prove and I always tried to dominate the opponent and that’s why I fit at Army to be in a culture that takes pride in toughness and aggression and just the violence of action and play.”

Finucane had his choices of Division I-A schools including Power Five programs Cal and Kansas. He said West Point was, “the perfect spot” for him.

“I wanted to be in the infantry and play football,” Finucane said. “I wasn’t really looking at facilities or coaches or any traditions or that stuff. I was really looking at the culture and recruiting and I fell in love with coach (Mike) Viti, coach Davis, coach Monken and the culture here and the brotherhood.”

“Last year, I was behind two great players in Peyton Reeder and Mike Johnson  and also Dean Powell and I could have sat back, watched and waited,” Finucane said. “But, I’m also thankful in those guys pushing me to get better and them actually trying to get me to take their spot, Now, they can see their investment return this year with me starting and I’m trying to get guys behind me to take my spot.”

Finucane made the seamless transition from right tackle, where he started Army’s first three games, back to right guard for the Black Knights’ victory over Miami (Ohio). Davis could move Finucane again on the line for Saturday’s road game.

“We talk a lot about just not flinching on this team,” Finucane said. “It’s the same footwork and same technique at tackle. It’s just another position and I did play guard all last year. I just had to refresh my memory and luckily, I had guys like Dean Powell, Noah (Knapp) and Zack Ward to look up to and watch their technique to get me up to speed. It wasn’t that hard of a transition.

“Up to this point in the season, I think the offensive line has done a great job with not flinching and responding to a guy here or there getting banged up or somebody can’t play or somebody is sick. Guys are stepping up and knowing the game plan and having the fundamentals and competitive courage to step up. I’m really proud to see that.

“Also, we’ve been playing very physical and just physically dominating the opponent and delivering body blows throughout the whole game. You can see on film that it really wears on the opponent.”

The physical brand of football that Finucane loves.