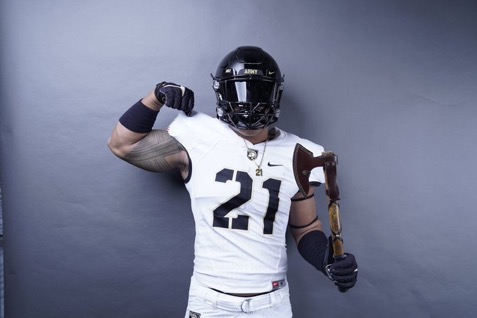 When Tano Letuli signs his certificate of commitment to Army Wednesday, the Cathedral Catholic (Calif.) linebacker will not only be attaining a lasting goal but also beginning a promise.

Letuli, a three-year starter, plans on putting forth maximum effort and energy to West Point and the Black Knights.

“I’m going to give this school and opportunity everything I have,” said Letuli in a message Tuesday night.

More than 2,800 miles away from his California home, Letuli found a program that will give the linebacker a sense of comfort. He committed to Army during an official visit this past weekend.

“What sealed the deal for me was the family environment,” Letuli said. “I fell in love with the brotherhood and how the players cared and treated each other.

The buliding of a “deep genuine connection” with Army coaches started in the fall of his junior season in 2020 when Letuli made the transition from safety to linebacker. Letuli is looking forward to playing in Army’s system.

“I think I will fit just fine in their defense because of the aggression and passion I play with,” he said.

Letuli is one of the many Army commits that will sign Wednesday.

Danbury (Conn.) WR-S Nick Smith announced his commitment to the Black Knights. Smith took multiple visits to West Point including an official this past weekend. He was offered and visited Air Force.

We will have updates throughout the day. Here’s Army’s 2022 recruiting class.

*Will be direct admit