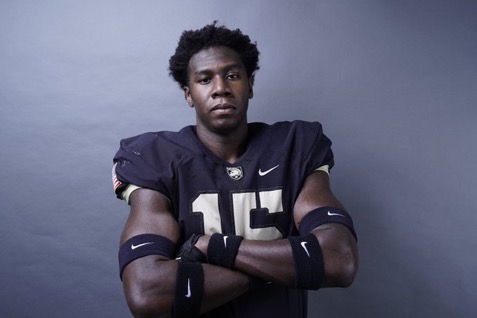 As Bowens explained, “It felt like I was a part of a true family when I was there.”

Bowens completed the visit in coach Jeff Monken’s office, giving his commitment to Army with his parents present Sunday.

“It felt like I finally accomplished something that I have been working so hard to reach for so long,” Bowens said. “As soon as I stepped on campus all of the coaches made me feel like I was at home. This is a huge part of the reason why I chose Army.

Bowens, who is 6-foot-4 and 210 pounds, will sign his certificate of commitment Wednesday. Navy and Grambling State were in Bowens’ top three.

Army is recruiting Bowens at the outside linebacker/rush position that Andre Carter plays. Bowens has watched highlight videos of Carter, who earned all-American status for a breakout 2021 season. He had 11 sacks and 58 tackles his senior year.

“My skills are my speed and quickness which helps everywhere but mainly helps me in rushing the passer,” Bowens said. ” I’ll bring to the team another person, who is constantly disrupting the backfield and being very versatile when needed in order to play any position on the field.”

In other recruiting news, Wakeland (Texas) wide receiver/safety Davion Woolen, who committed to Army in mid-January, announced he’s switched his commitment and will play heading to Oklahoma as a preferred walk on.