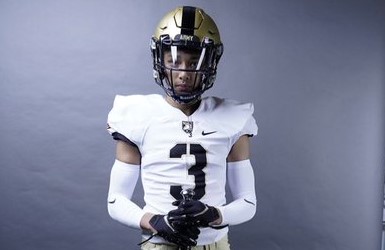 Nicole Newman always tells her son, “football is what you do not who you are.”

What Newman can become after graduation from college led the Alcoa (Tenn.) linebacker’s commitment to Army during his official visit this weekend.

“This weekend honestly put the icing on the cake,” Newman said. “There is just not another university in the nation that can give you the opportunities and rewards that this school gives you.

“It honestly felt like a huge relief came off my shoulders (when he committed). (Army) just felt like home.”

Army was one of Newman’s first offers but he admittedly didn’t have much interest in the Black Knights at first. As the conversations with Cort Braswell continued, the connection grew stronger with Army’s linebackers coach. Navy and Georgia Southern offered Newman earlier in the recruiting process. Division I-AA schools East Tennessee State and Charleston Southern were also in the mix.

Newman said he was impressed by the academic buildings on post and, “how accessible everything.” He also met fellow Tennessean and Army sophomore defensive end Austin Hill on the visit.

“The opportunities you get here, you just can’t find it anywhere else,” Newman said. “I’m making a 40-year investment not a four-year one.”

Newman, who is 6-foot-3 and 190 pounds, helped Alcoa to its seventh straight Tennessee state title his senior season. He had eight tackles and blocked a punt in the championship game.

“They’re (Army is) getting a player who’s selfless and will always put the team’s needs before my own,” said Newman, who says “Starburst and Skittles are basically my life.” Also a guy who will do whatever it takes to win and make my guys better.”