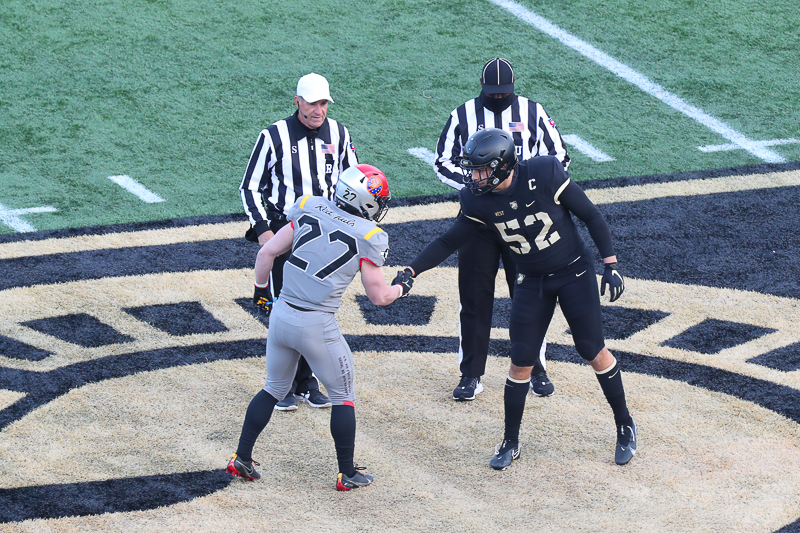 Editor’s note: Michie Stadium is recognized as one of the most iconic sports venues. Seth Mendelson has watched Army football from the banks of the Hudson for nearly 60 years.

My first game at Michie Stadium was a late summer event in 1964, sitting in the north end zone with my
brother and dad and watching Rollie Stichweh beat up on The Citadel. He was my first sports
hero, a man in black, gold and grey leading the Army team to an opening-day victory.
But, it was my second game at old Michie that I really remember most. We lost to a toothpaste,
29-28, when Colgate knocked the Cadets off.

Since then, I have been, by my own calculations, to about 325 Army football games, most of
them at Michie Stadium, though a number of road trips to places far away like California, Texas
and Michigan, but places nearby like Boston and, of course, Philadelphia for Navy games and a
huge win against Temple in 2017. My dad would take us to four or five games a year and we
finally went for season tickets in 1971. I became a season-ticket holder, now sitting in Section
13, in 1983.

Just for fun, and to get us all thinking, here are my five best games at Michie Stadium, as well as a few of my worst games. Plus, one very disappointing game that I believe told the tale for our
struggling teams of the first 15 years of this century.

The truth is Army should have won this game in regulation, holding an impressive 45-17 lead in
the third quarter. But, careless mistakes and extremely poor clock management allowed the
Cardinals to tie the game in regulation. Quarterback Joe Gerena’s 7-yard run put the Black
Knights up by seven in the second overtime and Louisville was stopped on the 7-yard line
on a desperate 4th-and-goal play in a stadium that had pretty much emptied out by then late
on a Thursday night. Mike Wallace ran for 269 yards in the game for Army.

Steve Lindell to Gary Steele. Say it over and over again.

California was very, very good that year and, with the Vietnam War in the background, there
was much talk out among students in Berkeley to cancel the game as a protest. But, it was
played and the 16th-ranked Golden Bears were winning 7-3 late in the fourth quarter. Then, Lindell
found Steele over the middle and the receiver, who I believe was the first African-American to
play at Army, raced 63 yards to paydirt.

It turned around the Army season as the Cadets, 1-2 entering the game, reeled off five of
the next six games, losing only at fourth-ranked Penn State in early November by just four
points

Fresh off a 0-10 season in 1973, Army did not look much better in 1974. The only two wins
came against undermanned Lafayette and Holy Cross squads and, frankly, Army was lucky to
escape with victories against either team.

Trailing by two with minutes left, coach Homer Smith, in his first year at Army, inserted Leaman
Hall, a tall, untested freshman into the game. Aided by a questionable pass interference call,
Army drove 80 yards in less than a minute and a half to the Air Force 16 yard line.
Mike Marquez drilled a perfect 33-yard field goal as time expired to give Army the win, before
more than 42,000 screaming fans at cold and dark Michie Stadium.

4. Boston College at Army. Oct. 12, 1985. Army 45, Boston College 14.
Coach Jim Young’s Black Knights were 4-0 going into this game, the first night game ever at
Michie Stadium. But the New York press and even the local press were not giving Army much
respect, noting that two wins came over Ivy League Penn and Yale, plus Western Michigan and
a Rutgers team that no one took seriously.

Army needed a big win and the Cadets got it on that Saturday night, putting a severe
beating on the Eagles. The near sellout crowd was howling and many were predicting a big
upset over Notre Dame the following week. Army lost that game, as well as games to Air Force
and Navy that year but did upset Illinois in the Peach Bowl in late December.

So while I was not at either of these COVID-19 impacted games – none of us were – just the fact
that they were played and the nailbiter against the Falcons has to put these two contests in the
picture. Army’s 15-0 win over Navy played in a heavy fog with only the two corps and friends in
attendance was its first shutout over Navy since 1969.

The following week, Jakobi Buchanan’s touchdown put Army in front for good with 73 seconds
left versus Air Force at Michie the week before, giving the Black Knights the Commander in
Chief’s trophy for the third time in four years.

The opening game of the ’72 season quickly turned into a disaster as the Cornhuskers scored
early and often, causing my dad to say that Army would not win a game all year. Guess what?
After that disaster, Army went to Texas A&M in College Station, a solid four touchdown
underdog, and beat the Aggies 24-14 on their way to a 6-4 season.

Making matters worse for Army, the game was a regionally-televised game when only a few
were broadcast and the announcers spent as much time, at the end, talking about how empty
Michie was in the second half as they did about the game.

Rumors abound that Nebraska ran up the score because an assistant coach on the Cornhuskers
played for Villanova in 1944 when Army beat them 83-0. Revenge, he supposedly told Army
coaches, was sweet.

2. Holy Cross vs. Army, Sept. 7, 2002. Holy Cross 30, Army 21
The opening game of coach Todd Berry’s third year at West Point and even the New York
papers were talking about the big turnaround that was about to come. Many were talking a bowl
game for Army; everyone thought we would be the best service academy team that year.

But, a fast kickoff return for a touchdown and a combination of tough defense by the Crusaders
and no offense by Army created an easy win for Holy Cross.

After the game, Berry was quoted as saying “There’s no question that this [loss] is the worst one
in 20 years [of coaching]. I’ve been around a lot of football. This one is the worst.”

Berry, who we all knew insisted on running a pro-set offense that traditionally relies on larger
lineman, was let go midway through the following 0-13 season, the worst record ever in college
football.