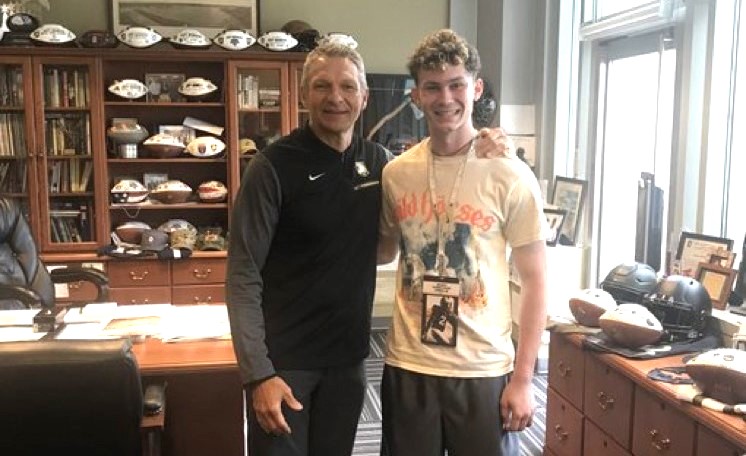 There’s a deep family football history that has always drawn Job Kralik to compete in the sport as its highest level.

Kralik’s dreams began in the sixth grade, one year before he would play the sport for the first time. Family tradition is to start football in the seventh grade.

The dreams came to fruition Thursday when Kralik contacted Army defensive line coach Sean Cronin with his commitment to the Black Knights.

“It (his commitment) was a special moment because of all of the time that he (Cronin) had invested in me with all of the calls and taking a full day showing me the campus,” Kralik said. “He was the first to offer me and he believed in me from the start.

“The coaching staff was my biggest draw…Obviously, the big-time football, facilities, Army-Navy and degree are all massive draws to anyone but the staff was really the biggest draw.”

Kralik, an Eatonville (Wash.) senior wide receiver, plans on following Division I path of his father and high school football coach, Gavin, and his uncle, Joe Kralik. Gavin Kralik played at Missouri, Tennessee and was a captain at Liberty. Joe Kralik played in three Rose Bowls for the University of Washington and played in Canadian Football League in 1995-96.

“Outside of football, I’m big into hanging out with my family,” said the 5-foot-11, 165-pound Kralik, who is the oldest of six children. “They are very important to me.”

“Every coach came up to me and shook my hand and told me how excited they were that I was coming to look at West Point.

Army is getting a versatile athlete in Kralik, the first commit from the state of Washington in the Black Knights’ 2023 class. Kralik has played wide receiver, quarterback, safety, cornerback and kicked for Eatonville. He caught 34 passes for 833 yards and eight TDs and rushed for 193 yards and five scores as a junior. Perhaps, Kralik’s most impressive stat is 10 blocked kicks in his high school career. He placed third in the 100 dash with a time of 11.1 seconds.

Kralik will be the first in his family to serve in the military.