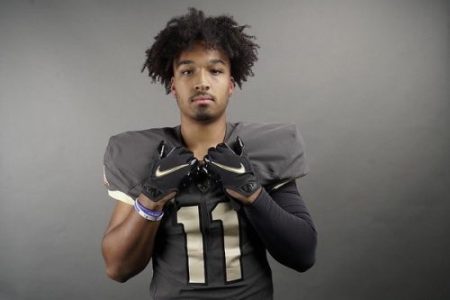 The conversations probably started in middle school with the Davis brothers.

Michael and Mason Davis would always talk about playing college football together. The talks became more serious at Denton Ryan (Texas) High School as the brothers received Division I-A offers from the likes of Army and Air Force.

When Mason committed to Army Tuesday morning, he said one of the reasons was the possibility of getting a chance to continue football with his brother in college. Michael, who visited West Point with his brother earlier this week, made that a reality Thursday morning, committing to Army quarterbacks coach Cody Worley.

“Coach Worley was my recruiter and he did an amazing job,” said the 6-foot-1, 205-pound wide receiver who helped Denton Ryan to a state 6A title in January. “When I got there for the official visit, I felt the family vibe right away. Before the visit and seeing everything and everyone in person, I wasn’t as heavy on Army. But visiting completely changed my view of it. The coaches are amazing and give you that family vibe.”

Like Mason, Michael felt more of a connection to Army’s coaches and players than Air Force, where they visited last month.

“If I’m being honest, Army blew Air Force out the water with their visit,” Michael Davis said. “The hospitality and family feel (were different). The Army visit felt like home and the way they make you feel like you are already part of the brotherhood. When we arrived there, they were right there greeting us with enthusiasm and every single coach was there and they all knew exactly who we were and were excited to have us.”

Davis, who has played wide receiver and H-back for Denton Ryan, caught a touchdown pass in the state championship game against Cedar Park. In Army’s offense, wide receivers are valued as blockers as much or maybe more than pass catches. Army wide receivers combined for 17 receptions in 2020. Davis hopes Army will throw a little more often when he arrives.

“They are actually going to start putting the ball in the air more starting year,” Michael Davis said. “It wouldn’t be too different than H-back as far as run-game blocking. As far as the receiving and getting the ball aspect, most teams play single coverage to their (Army) receivers because they expect run so that opens up big-play opportunities with just one man to beat. Army wide receivers coach (Keith) Gaither showed me the big-play opportunities they had this season on film because they tend to have single coverage.”

The Davis brothers will continue to share the same locker room at the next level. And, it was the family atmosphere at Army that brought both of them to their decisions.

“The players seem like such a brotherhood,” Michael Davis said. “Seeing that they are regular people like me and not the robots people think they are is good to know.”