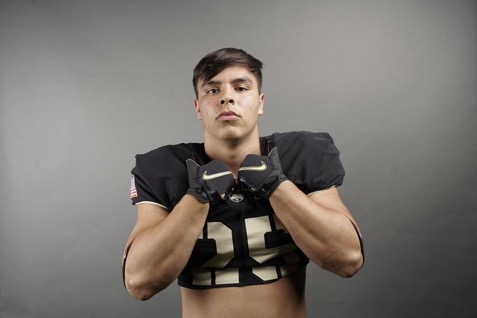 Steven Powers flexed for the camera in Army football’s game white uniform with a black helmet.

When Powers took the helmet off, he smiled for a few more photos.

Powers sensed a welcoming vibe from the start of his Army visit last weekend. The visit’s family-oriented feeling brought the Franklin (Texas) linebacker to his commitment Friday.

“What led me to my decision to commit to Army was the brotherhood the players and coaches have,” Powers said. “That made me want to be part of this amazing football program and school.

Powers’ decision added to an incredible recruiting week for Army in the state of Texas. Seven Texas recruits have committed to the Black Knights since Monday.

Navy also offered Powers but, “what put Army over the top was they (the coaches) were far more interested in recruiting me than Navy.”

Army is recruiting Powers to play inside linebacker. Powers believes his “footwork instinct and speed fit the position.” He made 49 tackles, four sacks and picked off a pass in six games as a junior. Powers also rushed for 381 yards and seven touchdowns in the shortened season.