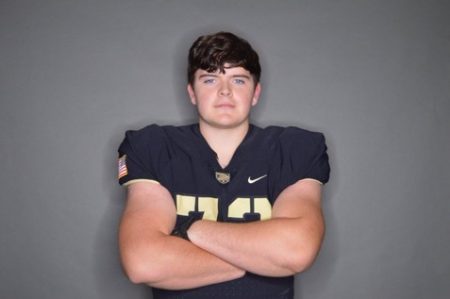 That’s a description of Denton Ryan (Texas) offensive lineman Henry Appleton by one of his high school teammates.

Appleton’s work ethic and blocking helped Denton Ryan to a state 5A championship last season. The 6-foot-3, 275-pound offensive tackle will be bringing those talents to Army football after his commitment to quarterbacks coach Cody Worley and offensive line coach Sage Tuitele following a visit to West Point Friday.

Appleton is the third Denton Ryan player to commit to the Black Knights this week, joining brothers Mason and Michael Davis.

“The whole atmosphere and brotherhood of the school blew me away,” said Appleton, who was also offered by Air Force. “After touring the campus, I decided to commit.

“It feels awesome (to be committed to same school as Davis brothers). I’m glad I’ll have some friends going with me.”

Mason Davis said Appleton is the type of player that, “comes to football every day ready to give his all for his teammates.”

“His progress over these last four years has been amazing,” Mason Davis said. “He is more than deserving of all the great things that are happening for him. I love getting to hang out with him every day. He’s a very funny guy who I consider one of my best friends. I look forward to spending these next few years with him.”

Appleton said the thought of serving his country was in his mind growing up. His grandparents and great grandparents were in the military.

“I am excited to serve and I’ve always wanted to,” Appleton said. “As a kid, I’ve always had the interest but I’ve just realized the opportunities that come from serving.”

Appleton’s commitment continued a hot week of recruiting for Army in the Lone Star State. Army has received seven verbal commitment from Texas recruits since Monday. Appleton said his decision came down to Army and Air Force.

“I think the overall attitude of West Point fit me better,” Appleton said.