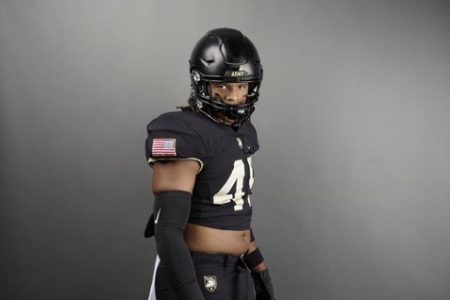 Ali wasn’t rooting for the Black Knights or his hometown Roadrunners at the time but the Holy Cross defensive end got a glimpse into Army’s style of play.

“I knew Army was going to win based of its record,” said Ali about Army’s 28-16 victory over UTSA. “I followed Army after that game. I think their program is amazing and what they offer in the program is what I’m looking for.”

“The coaches, the alumni, the campus life and what they had to offer for an education stood out to me,” Ali said. “Through the process of recruitment, Army was consistent and that was the main thing I was looking for. I wanted a school to show me that they wanted me, which was I chose to commit.

“On my visit to Army, they showed me what Army was all about and I loved every part of it. It felt right and the right place for me and my future.”

Having a family with a military background helped mold Ali into the player and person he is today.

“I’ve learned dedication, a strong work ethic and the importance of character and respect,” Ali said.

Ali’s commitment is part of big recruiting week in Texas for Army. Ali is one of seven recruits to commit to Army since Monday. He brings versatility to Army’s defensive front.

“I believe my skills can benefit their defense not only at defensive end but all around the defensive line,” Ali said.