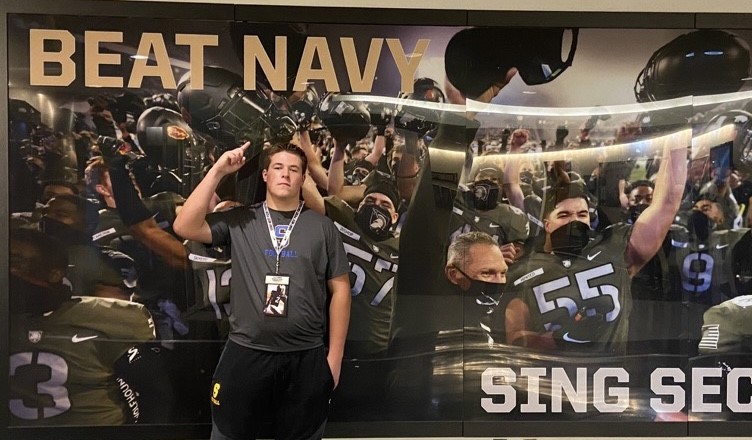 More than a month later, Klambara and Eaton were on a visit as Army recruits during the UConn game, talking about their futures.

Klambara and Eaton discussed committing together at the UConn game. Eaton, who Army is recruiting as a tight end, gave his verbal commitment to the Black Knights after the game. Klambara followed with his commitment to Army the next day.

“We both felt like this was our home,” Klambara said. “Hopefully, we’ll line up next to each other.”

The visit was Klambara’s fourth trip to West Point this year. Klambara attended Junior Day in April, was the Class of 2023 offensive line MVP at Army prospect camp in July and took his official visit in October.

Army was the first school to offer Klambara the opportunity in both football and track and field. Klambara also had strong family ties to the Army. His grandfather, Mike Conneen, was stationed at Army’s Nike missile base in Swedesboro, N.J.

“To continue the (Army) legacy would be amazing,” said the 6-foot-4, 300-pound Klambara, a three-year starter at Springfield.

Army’s culture, camaraderie between coaches and players and the brotherhood with players won Klambara over during his visits. Klambara will throw shot put and discus at West Point.

“I decided to choose the Black Knights over Temple and Navy because of the overall atmosphere of West Point from the academics to athletics was an opportunity that I wanted to pursue.”