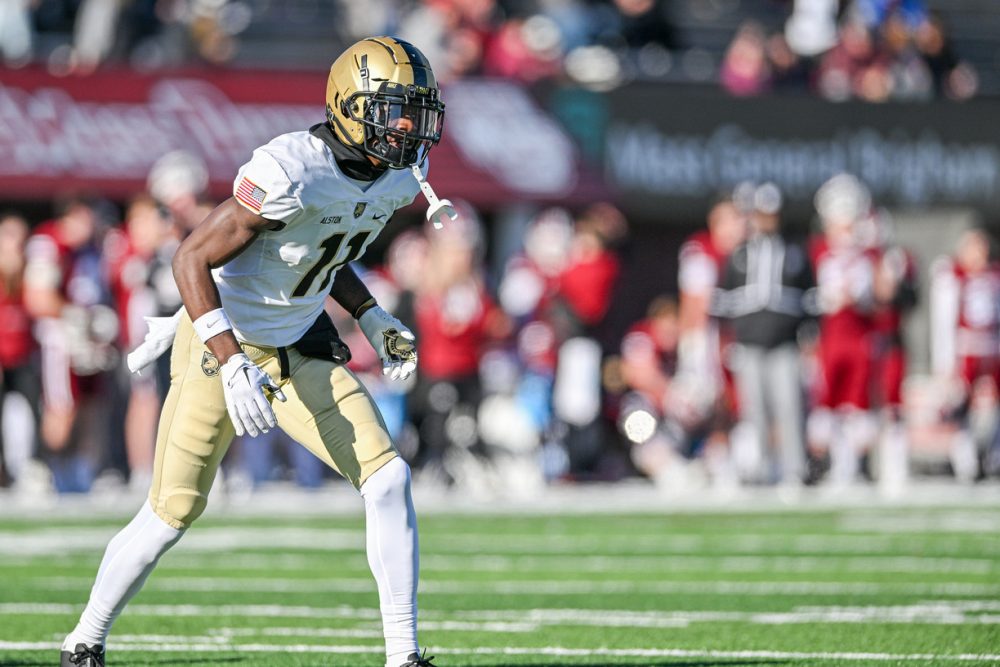 Isaiah Alston’s one-handed catch went viral and made SportsCenter’s Top 10 plays at No. 10.

The video, which received more than 500K views, was also featured on ESPN’s College Football Final as its No. 4 top play and was picked up by major sports social media accounts.

Quarterback Tyhier Tyler, who threw Alston the pass, wasn’t surprised by the highlight reception. Alston makes plays like that every day in practice, Tyler said.

The catch was Alston’s 40th career reception, the second-most in the Jeff Monken era (2014-present). Edgar Poe had 42 career catches.

Junior apache Jimmy Ciarlo continues to make plays. Ciarlo could have been credited with Army’s second forced fumble in the first half and also added a tackle for loss. He’s the only Army defensive player to start all 11 games this season.

Senior linebacker Andre Carter became the second Army player to be named to the Pro Football Focus College’s Defensive team of the week this season. Carter had three tackles, 1.5 tackles for loss and a quarterback hurry in three quarters of play. Safety Marquel Broughton was selected after his effort in the Air Force game.

Two Army wins, a completion down the seam to tight end Josh Lingenfelter in each of the victories. Army has completed one pass to a wide receiver not named Isaiah Alston this season. Perhaps, Lingenfelter becomes a second option against Navy (Dec. 10). Stay tuned.

Freshman cornerback Jaydan Mayes made a couple of highlight plays of his own. Mayes picked off his first career pass in the fourth quarter and had tight coverage on third-quarter, 4th-and-goal incompletion for Army’s third goal-line stand in the last two games. Believe Mayes is the first Army freshman to intercept a pass since Elijah Riley and Jaylon McClinton in 2016.

With Army down three of its top rotational slotbacks (Tyrell Robinson, Ay’Jaun Marshall and Miles Stewart), Tyson Riley, the team’s leading rusher as a fullback, made his first start on the wing. Don’t think Riley took a snap at fullback Will Riley line up at slotback against Navy? We’ll see. A high school quarterback, Riley has now played fullback, slotback and tight end in his career.

Army’s defense allowed its lowest points (7) of the season. The Black Knights have given up 47 points over their last four games.