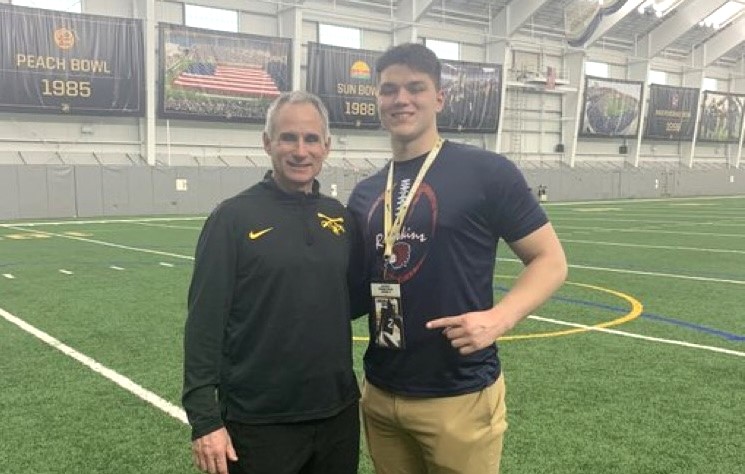 Buchys’ mindset continues off the field.

“I don’t settle to be good or OK,” said Buchys, a Neshaminy (Pa.) defensive end. “I’m always striving to be great at everything I do whether it’s at football, school or being a great person.”

That’s the attitude that Buchys will bring to Army’s football program in the future. Buchys committed to Army Sunday, contacting assistant coach John Loose with his decision. Holy Cross had called with an offer earlier in the day.

“I had a gut feeling that I wanted to be here (at Army),” Buchys said.

Buchys made his initial trip to West Point for an unofficial visit on April 14 after receiving his first offer from Army the previous week.

“I was welcomed by the coaching staff,” Buchys said. “They all made me feel like I was right where I belonged. I got a tour around the facilities and (post) and I knew right there and then that it wouldn’t get better than this.”

Buchys returned for Army’s spring game on April 22 and received a first-hand look at the program’s brotherhood.

“I said to myself I wanna be apart of that,” said the 6-foot-3, 245-pound Buchys, who made 70 tackles (17 for a loss) and added three sacks in nine games his junior season. “Typically, I’m always asking more from myself and am never satisfied but with this decision I can step back and say I’m very proud, and I’m excited about the future ahead of me.”

Serving the country was one of the intriguing aspects to Buchys during recruiting. His father and grandfather were both in the National Guard. While, an uncle served in the Navy.

“I look at serving my country after football to be an honor,” Buchys said.

Buchys was familiar with the Army-Navy game and the Black Knights’ triple-option offense prior to recruiting. He’s developed a further appreciation for the rivalry.

“I love how important the Army-Navy game is to the program,” Buchys said. “It really gets me fired up. Everywhere you turn, it’s ‘Beat Navy’ and it’s awesome.”

“I love playing pickup ball on the weekends,” Buchys said. “The individual intensity and pace basketball brings is awesome plus it’s a big help for my foot work.”