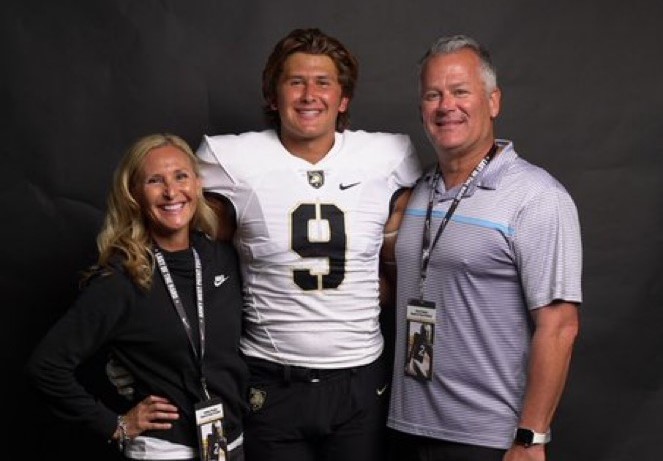 Zane Poulter has always dreamed of playing college football at the highest level with his cousin Hunter Roddy.

The cousins started talking about making the dream a reality during Poulter’s sophomore year at Chino Hills (Calif.) High School. Roddy was being recruited by Army his junior season at Chaparral (Calif.) High. He would commit to Army in June 2021 before his senior year.

As Roddy was preparing for Monday’s R-Day, Poulter was moving closer to his college decision. Poulter announced his commitment to the Black Knights Saturday.

“(When) he was getting recruited and we both agreed it would be awesome to end up playing together,” Poulter said. “What lead to my decision has been how kind and great the coaches were during the recruiting process, especially coach (Sean) Saturnio. Along with that during my visit, the coaches and players all were super nice and welcoming making it feel like they really wanted me to be there.”

Poulter chose Army over an offer from Air Force. Army was the first to offer Poulter, who is being recruited to play outside linebacker but at 6-foot-3 and 220 pounds could grow into a defensive end. Poulter also has a 78.5-inch wingspan.

“What set it (Army) apart (from Air Force) for me would have been how the Army coaches really seemed to want a relationship with me and work on getting to know me during the recruiting process,” Poulter said.

Poulter has followed Army closely and believes the Black Knights can sustain their winning ways by the time he arrives on the banks of the Hudson.

“I think it’s definitely heading in a good direction,” Poulter said. “All the guys seem to be putting in the work needed to push the program along.”