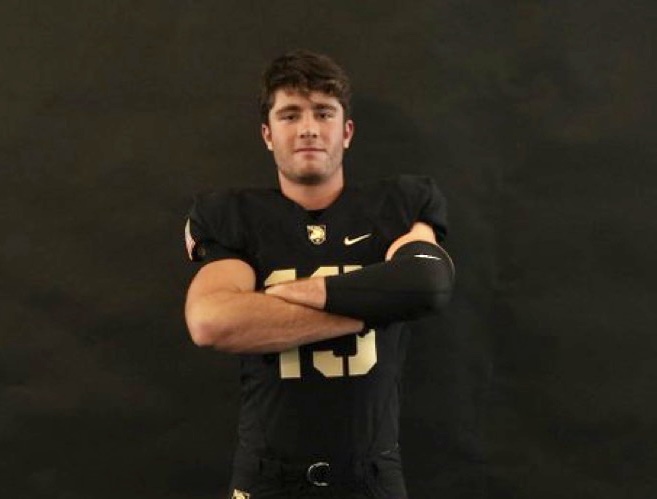 Aidan Casuccio was caught somewhat by surprise when one of his The Hun School football coaches asked if he would consider Army.

Casuccio always wanted to be in the Army growing up and was considering a college ROTC program if football didn’t work out.

There was some hesitation from Casuccio at first. Casuccio wanted to know moee about what he was committing to and needed more information on the process of West Point.

Casuccio took a gameday visit to Army Oct. 1, speaking with coaches. He had additional conversations with West Point alumni.

Another phone call with Smith hit home Friday about how much Army coveted Casuccio. He made his commitment to the Black Knights during the call.

“It honestly seemed like a too-good-to-be-true opportunity,” Casuccio said. “Out of all of schools that recruited me, Army was the only one where I had at least one coach text me a day (when permitted).”

After Casuccio’s commitment, Smith told him, ‘You made the best decision for your future.”

“Seeing the amount of success that has come through the school before me, I have to absolutely agree with that,” Casuccio said.

Navy and Air Force also had interest in Casuccio, he said. Casuccio’s other offers were from FCS Georgetown and Marist.

Casuccio, whose grandfather was a sergeant in the Army and served in Korea, is taking a postgraduate year at The Hun School after a successful run at Rumson-Fair Haven (N.J.) High School. He also received some advice from Army freshman defensive end Jack Latore (Middletown South N.J. HS). The two trained together in the offseason.

“We talked throughout the process and I was told about the social life and just the day-to-day feel,” Casuccio said. “I also talked with (sophomore tight end) Will Montesi. He told me the same things and told me about practice and how it is as a tight end on the team.”

Casuccio thinks his aggressiveness and explosion will help blocking for Army’s option offense.

“I believe I’m one of the hardest hitters off the line in the first three steps out there,” Casuccio said. “Most of my pancakes (blocks) are from initial contact. I can’t wait to be out there blocking for them especially with the triple option and how run heavy Army is.

“I’ve been in run-heavy offenses and I’ve been heavily utilized effectively in play-action concepts where I know I’ll be able to succeed as well.”