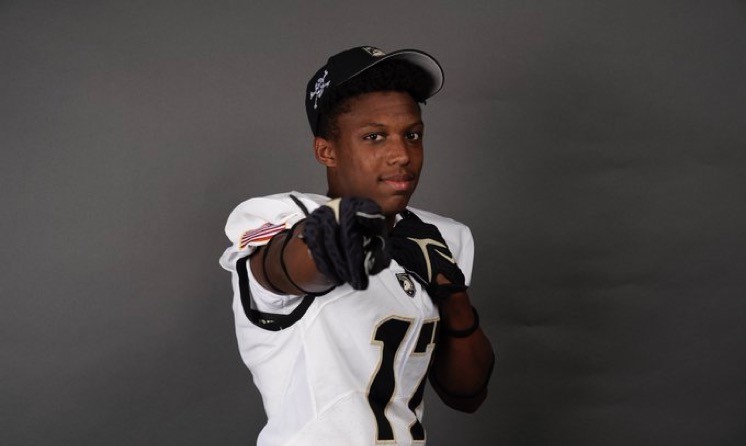 Jaxon Hammond liked his quick visit with Army football in April so much that he wanted to return to West Point as soon as possible.

Hammond, a cornerback from Christian Brothers High School in Memphis, was back for his official visit this past weekend. And, it won’t be Hammond’s last trip to the academy. Hammond gave his verbal commitment to linebackers coach Cortney Braswell Saturday.

“I feel in love with the school, football program and brotherhood,” Hammond said. “The brotherhood is a concept that is big at my high school. So, it was really cool to see it at that level too.

“The players who were there with me were all so close. You could see the brotherhood in full effect despite them all being from different parts of the country.”

“The whole coaching staff and some of the players soon heard the news and celebrated,” Hammond said. “It feels amazing to be committed to Army and I’m anxious to get started.”

Army is recruiting Hammond to play in the secondary and his speed could also be a game-changer in the return game. Hammond holds Memphis city Division II-AA record in the 100-meter run with a time of 10.52 seconds. Hammond’s skills and speed were coveted by many schools, including the Southeastern Conference’s Mississippi State and Tennessee as well as hometown Memphis, Navy and Air Force.

“Coach Braswell, coach (Daryl) Dixon, and coach (Jeff) Monken have been actively recruiting since March,” Hammond said. “It had come down to a few schools, but I feel that Army was always going above and beyond in their recruitment.”

Hammond is Army’s second Tennessee commit of its 2023 class. He has connection within Army’s brotherhood. Hammond played basketball with the younger brother of Black Knights junior defensive end and Memphis resident Austin Hill.

Hammond has chosen to follow the path of his grandfather, Joseph Verrett III, who served in the Infantry branch of the Army.

“He loved his experience and always hoped that I might serve one day, too,” Hammond said. “I’m sure that he’s smiling down at me right now.