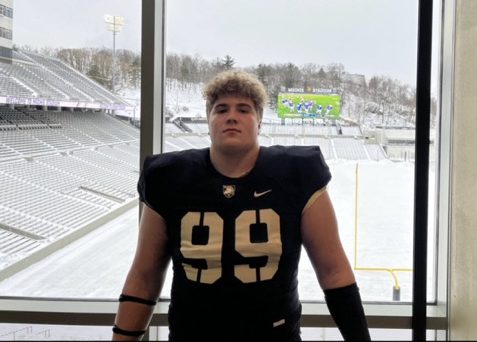 Army was a college that Gemma, Delbarton (N.J.) junior defensive end, had been interested in since his freshman year.

Drinkall requested general information about Gemma and said he would be in touch. Gemma heard from Drinkall again in December 2021 with an offer to play at West Point and a visit on Jan. 29 followed.

This week, it was Gemma that was reaching out to Drinkall. He wanted to know more about the academy’s admissions process.

On Tuesday, (2/22/22), Gemma decided that West Point was the place that he wanted to continue his athletic and academic careers. Gemma became the first member of Army’s 2023 recruiting class.

“Army has been one of my favorite schools since I was little and my dream school freshman year,” said Gemma, who is 6-foot-3 and 280 pounds.

Gemma added, ”You can tell West Point really cares about their players with the facilities they provide for them along with equipping them with one of the best coaching staffs in college football. I could also really feel the brotherhood. West Point is a one of a kind place… a place where you can play top college football, have the best academics, and be set up for life.”

“I am really excited to be placed into coach Woody and coach Cronin’s defense,” Gemma said. “They run a defense I think I can thrive in. They love to utilize their d-line at multiple positions and have them shoot gaps causing chaos for opponents.”

Gemma said he’s “ecstatic” about being Army’s first 2023 commit and plans on getting the word out about the program to other recruits.

“The competitive side of me is really proud,” Gemma said about starting Army’s 2023 recruiting class. “I can’t wait to help guide other recruits home to the greatest brotherhood in the world.”