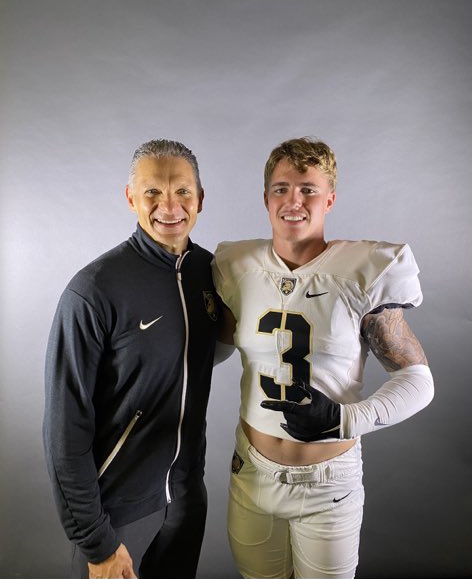 Connor Clinton knew he was going to commit to Army Friday night but seeing his future team play live as part of an official visit affirmed the Casteel (Ariz.) safety’s decision Saturday.

Clinton watched Army’s defense shut down UConn in the first half while continuing to build bonds with future teammates.

After Army’s 52-21 win, Clinton met with Jeff Monken and gave his verbal commitment in the coach’s office.

“It (the visit) was unmatched,” Clinton said. “The atmosphere was amazing! The opportunities are endless and the all of the bonds I have with the players already along with the amazing coaching staff!”

Army was the first to offer Clinton. Monken, recruiting coach Saga Tuitele and position coach Shiel Wood were consistent in their interest from the start. Clinton was also considering Arizona and Fordham. Navy and Arizona State also offered Clinton.

“They have always recruited me heavily,” Clinton said. “Coach Tuitele, Monken and Wood reach out to me weekly and put a lot of time into me. Army (was my top school) since they believed in me and pulled the trigger first.”

Clinton believes his physical play and leadership will be great additions to Army’s fast-paced defense under coordinator Nate Woody. A three-sport athlete in football, lacrosse and track, Clinton also carries a 4.1 grade-point average.

This weekend’s visit provided Clinton with the opportunity to catch up with current players including safety and captain Cedrick Cunningham as well as current recruits. The message was the same.

“We just talked about carrying out their legacy,” Clinton said.

Clinton is already thinking about the future.