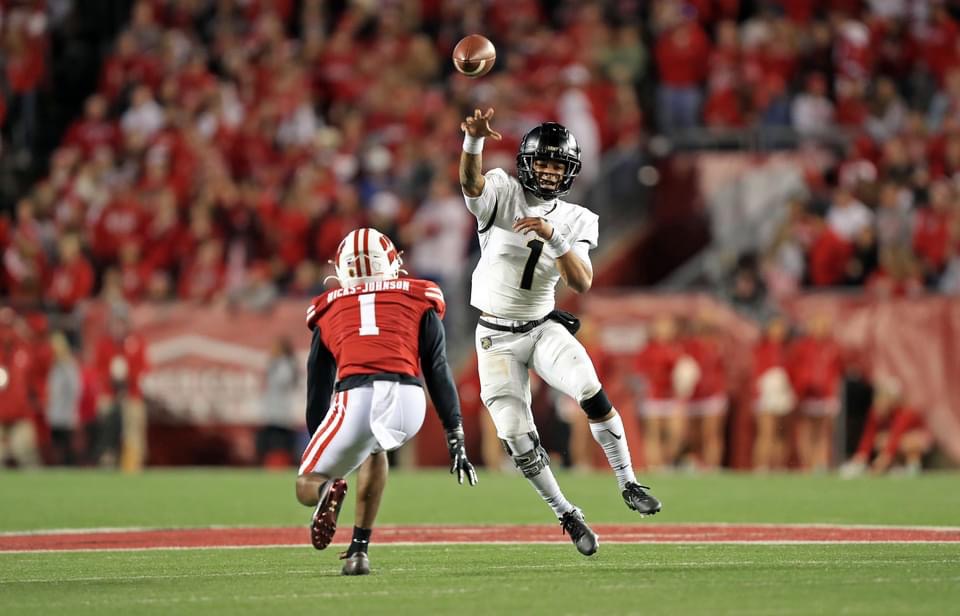 Another game at a famed Power Five program. Another winnable game that escaped Army.

This script was different than previous close calls at Oklahoma (2018) and Michigan (2019) with the Black Knights making a fourth-quarter comeback.

Army’s offense started to figuring out Wisconsin’s top-ranked run defense. And, the Black Knights played dynamite defense of their own in the second half, holding the Badgers to 80 total yards after halftime.

Ninety-one yards stood between Army and a program-defining victory.

Many may look at Wisconsin linebacker Leo Chanel’s sack and forced fumble of Jabari Laws leading to a 1-yard Badgers touchdown as the game clincher. Army would come right back and score after a perfect pass-and-catch from Jabari Laws to A.J. Howard and Howard’s 6-yard touchdown run with 38 seconds left. Army gave every ounce of effort down to the ensuing onside kick where Fabrice Voyne blew up Wisconsin’s Jack Sanborn, who lost the ball just slightly before gaining possession.

There were other game-changing moments that may slip under the radar in Army’s 20-14 loss. Wisconsin’s 4th-and-1, fake-punt conversion was huge in the second quarter. It kept the Badgers’ second touchdown drive alive and Graham Mertz would hit Danny Davis for 36 yards (Wisconsin’s biggest play) on the next snap.

Another pivotal play was the missed holding call on Andre Carter that allowed Mertz to escape the pocket and convert a 3rd-and-8 in the fourth quarter. A penalty backs up Wisconsin and maybe gives Army better field position for that potential game-winning drive and more time for the possession if the Black Knights held on the third-down replay.

There’s a lot of buzz over the officiating. Have a feeling the Big Ten conference should be receiving a list of missed calls from Jerry McGinn and his crew. McGinn isn’t getting any calls from Hollywood after his dramatic pause and reveal of Chanel’s forced fumble being upheld. Wisconsin was called for four five-yard penalties – two false starts, an illegal shift and offsides.

Army still has yet to draw an offensive holding penalty this season with a pass rush that includes Carter, the FBS sack leader. Nose tackle Nolan Cockrill has also drawn holds that haven’t been called throughout the season.

Army’s 179 rushing yards was low for its standard but the total was the most that Wisconsin has allowed since 273 yards against Nebraska on Nov. 16, 2019, per Army Athletic Communications.

Army struggled to find answers for Chanel, who finished the game with 17 tackles. Chanel disrupted the Black Knights’ running game by timing the snap count, beating the blocks of guards and hitting quarterback Tyhier Tyler almost immediately after he received the ball.

Knew this already but quarterback Tyhier Tyler’s toughness is off the charts. Tyler had the wind knocked out of him from a big hit after pitching the ball in the fourth quarter. He missed one official snap, authored Army’s longest run of 36 yards on his first play back and scored a 5-yard touchdown.

Army fullbacks struggled to move the ball, gaining 34 yards on 19 carries. Army was waiting for a big inside run that never happened. Twelve fullback carries went for two yards or less.

The passing of Jabari Laws was key in sparking the offense after a sluggish first half. Laws, who was playing his first extended action since Nov. 2019, completed Army’s first pass to Isaiah Alston for 34 yards in the third quarter. Army would run three straight fullback dives for a net of four yards and settled for a missed 43-yard field goal.