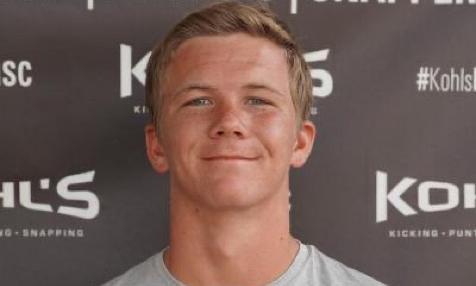 Wagenseller has lived by West Point’s motto for as long as he can remember. The Poway (Calif.) punter has known since the sixth grade that he wanted to attend West Point and commissioned as an officer.

The opportunity was afforded to Wagenseller Tuesday when he received his first offer from Army. After speaking with his parents and brother, who is in the Army ROTC at Norwich University, Wagenseller called Army coach Jeff Monken and special teams coach Sean Saturnio with his college decision.

Wagenseller’s commitment will continue his family’s long tradition as a fifth generation member to serve in the military. The family’s history dates back to the Revolutionary War. Wagenseller’s father, Ward, is a major in the Army.

“This has been a dream of mine since I was a kid,” Wagenseller said. “Since I was a little kid, he (his father) always talked about West Point and how prestigious it was and how it is the best school for me to go to. We watched all the football games and have West Point items all over my house.”

Wagenseller received a message from Saturnio, gauging his interest, a few weeks ago. He answered “Yes,” and stayed in contact with Army until the offer.

“I knew as soon as I got offered that I would say yes because I have always dreamed of this,” Wagneseller said. “(My family and I) all agreed this is an offer I couldn’t pass on.”

Army is recruiting Wagenseller to punt and handle kickoffs. Wagenseller is averaging 44 yards per punt this season. He booted three punts for an average of 51 yards and placed all three inside the 20-yard line against Ramona earlier in the season.

Wagenseller visited West Point when he was in the seventh grade. He plans on attending his first Army-Navy game in December at MetLife Stadium and visit West Point again that month.

“I am honored to carry on the long family tradition of serving my country,” Wagenseller said.