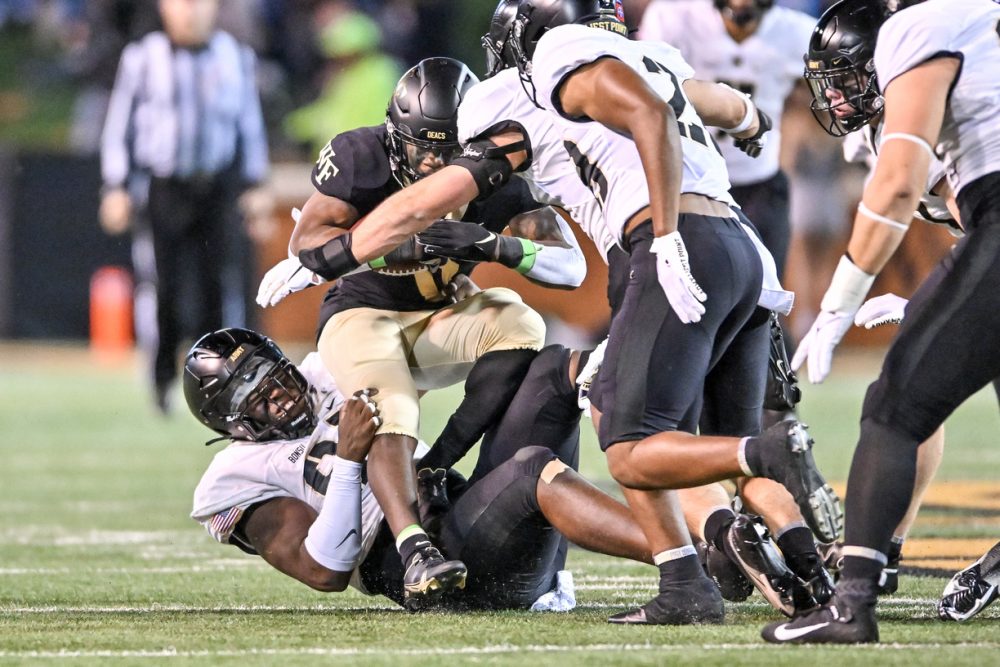 You think of the 2021 Armed Forces Bowl win over Missouri, taking Michigan and Oklahoma into overtime and battling with Wisconsin into the fourth quarter last season.

Saturday’s game against No. 15 Wake Forest wasn’t it. After Army’s game-opening drive ended with a fumble on the Wake 9, the Black Knights never seemed to get on track.

Going in as a heavy underdog still thought Army would have the advantage in running the football.

But, it was Wake Forest’s rushing attack that was more difficult to slow down early in the Black Knights’ 45-10 loss Saturday. The Demon Deacons ran the ball on seven of nine plays on their first touchdown drive and all five plays of their next possession, which resulted in a touchdown.

Army’s 26-game streak with a rushing touchdown was ended. The Black Knights failed to reach the end zone on a run for the first time since Sept. 26, 2020 against Cincinnati.

Army’s offense has scored only five touchdowns in its last 10 quarters against FBS competition.

The injury to slotback Tyrell Robinson is a devastating blow to Army’s offense. Robinson, who appeared to hurt his knee on Army’s opening drive of the second half, is the team’s most dynamic player and a game changer as was seen on his 47-yard pass from Tyhier Tyler on the game’s second play.

Not sure where the Black Knights’ defense goes from here. Army has now allowed 38.7 points per game in its losses. The defensive line is banged up and playing through injuries. Maybe, younger linemen Trey Sofia, Jacob Tuioti, Kemari Copeland, Andre Miller and Kyle Lewis receive more of a run against Colgate Saturday.

On that note, maybe it’s time to give senior quarterback Jemel Jones a chance to start. The rotation of Tyhier Tyler and Cade Ballard hasn’t resulted in wins over FBS (Division I-A) programs this season. Jones looked prepared and ran the offense smooth enough when he entered late in the third quarter against Wake. Granted the game was in hand for Wake, Jones connected with wide receiver Isaiah Alston on a few throws and had Army’s longest run (25 yards).

The Black Knights had four false start penalties in the first half, two on the opening drive. Jeff Monken said Wake Forest’s signals to shift its defensive line were similar to Army’s offensive calls. That may have attributed to the first two false starts. Still, false starts, in general, has proved to be drive stoppers in the past as was the case here.

Army completed two of its first six passes on first down with an interception and a sack. The interception was thrown by Cade Ballard off his back foot with four seconds left in the first half and Army driving into Wake’s red zone. James of As For Football made a great point on Twitter saying Army could have spiked the ball on first down there instead of rushing into a play. The Black Knights still had a timeout remaining that it kept in their pockets.

Couldn’t make the game in person. Couldn’t watch it live on television either as the game was blacked out on ESPN3 in New York-New Jersey area, due to YES Network airing it, I guess. Instead, listened to Army radio’s call, which made Wake’s runaway outcome seem to go by a little quicker.