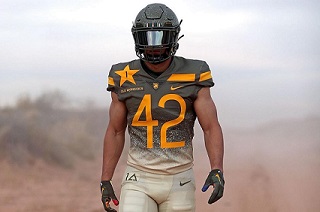 Army will represent the 1st Armored Division when it takes the field for the Army-Navy game Dec.10 at Lincoln Financial Field in Philadelphia.

The Black Knights will wear uniforms in honor of “The Iron Soldiers” and the 80th anniversary of Operation Torch, the 1st Armored Division’s first combat initiative during World War II.

Operation Torch, an Allied invasion, secured victory over Axis forces in North Africa. “The Iron Soldiers” would continue with successful operations in Italy and Western Europe, participating in the holding of Germany.

The olive green, mud-splattered Army uniforms are inspired by the World War II era M3 tank. The uniforms have yellow numbers with tank-inspired font. Helmets have the 1st Armored Division’s patch on the right side and “Old Ironsides” under the their backs.