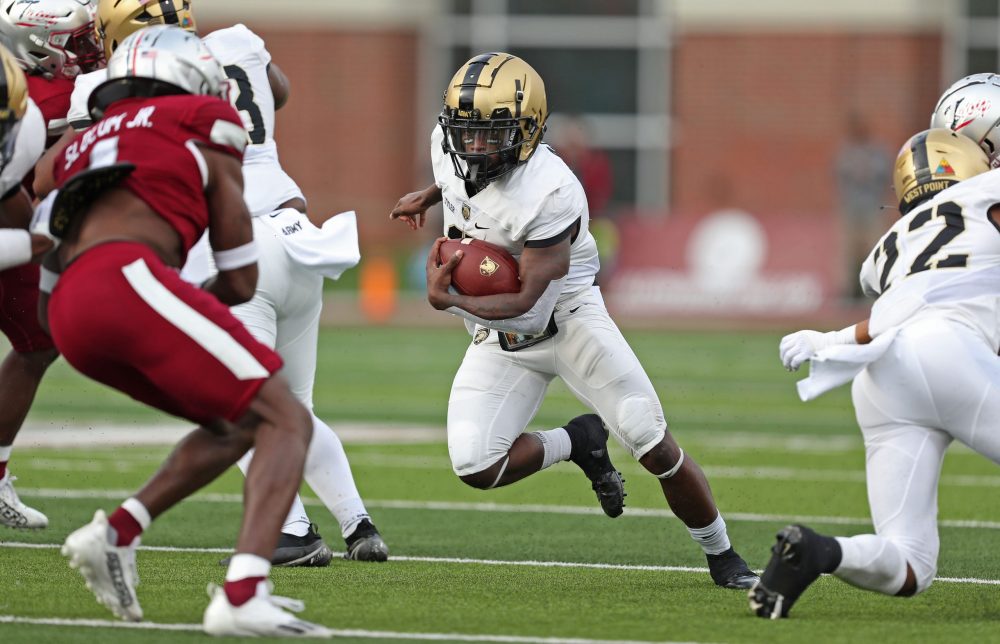 Looking at Army’s halftime stats against Troy and you’d think the Black Knights were in complete control and heading toward their fourth win of the season.

Army completely dominated the first two quarters – 232 total yards to 40, 46 plays to 15, 24 minutes time of possession to six minutes – but it didn’t show on scoreboard as the Black Knights took a 9-0 lead into the break. Two fumbles by quarterback Tyhier Tyler in the red zone, one on 4th-and-inches from Troy’s 2 during opening drive, proved costly in a 10-9 loss. Five of Army’s eight fumbles have been lost in opponent’s territory this season.

Army’s margin for winning is so razor thin sometimes it’s inches that can decide the outcome. The Black Knights nearly had a touchdown to end the first half but Isaiah Alston’s foot hit out of bounds near the pylon before he came back into the field of play to catch a pass from Jemel Jones. Army settled for a field goal.

It was a different story after halftime. Army did not score a point in the second half for the second straight week. The Black Knights have scored single digits in consecutive games for the first time since Nov. 22-Dec. 6, 2008 (Rutgers, Navy)

Penalties, play-calling and execution certainly didn’t help in the second half Saturday.

Don’t know why Army was content on running the football with the fullback two times in a row after picking up a first down on Troy’s 34 with 1:31 left. Army threw a 5-yard out to Braheam Murphy on third down, a few plays too late, that set up a 42-yard, game-winning field goal that was missed by Quinn Maretzki. Surprised Army played for 42-yard field goal rather than throwing the ball downfield with the hopes of scoring a potential touchdown or at the very least, a shorter field goal.

Safety Quindrelin Hammonds and linebacker Jimmy Ciarlo led the defensive charge, teaming to force and recover a fumble. Army nearly had another fumble forced in the first half but officials blew forward progress dead somewhat prematurely.

Linebacker Cam O’Gara, who stepped in for Lowin, tied Hammonds for a team high with seven tackles in his first career start.

Special teams had its roughest game of the season with a extra point and field goal misses by Maretzki. Punting continued to struggle. Billy Boehlke had punts of 16 and 13 yards, not exactly changing field position. Army has shanked at least five (to our count) of its 27 punts this season. Not ideal.

The tight-end-down-the-seam pass that we’ve been calling for was completed to Josh Lingenfelter for 36 yards in the first half. It was Lingenfelter’s second catch of the season and first since UTSA (Sept. 17).

Tyler recorded his fourth 100-yard rushing game of his career. The quarterback had 106 yards in the first half and finished with 100 yards on the day.