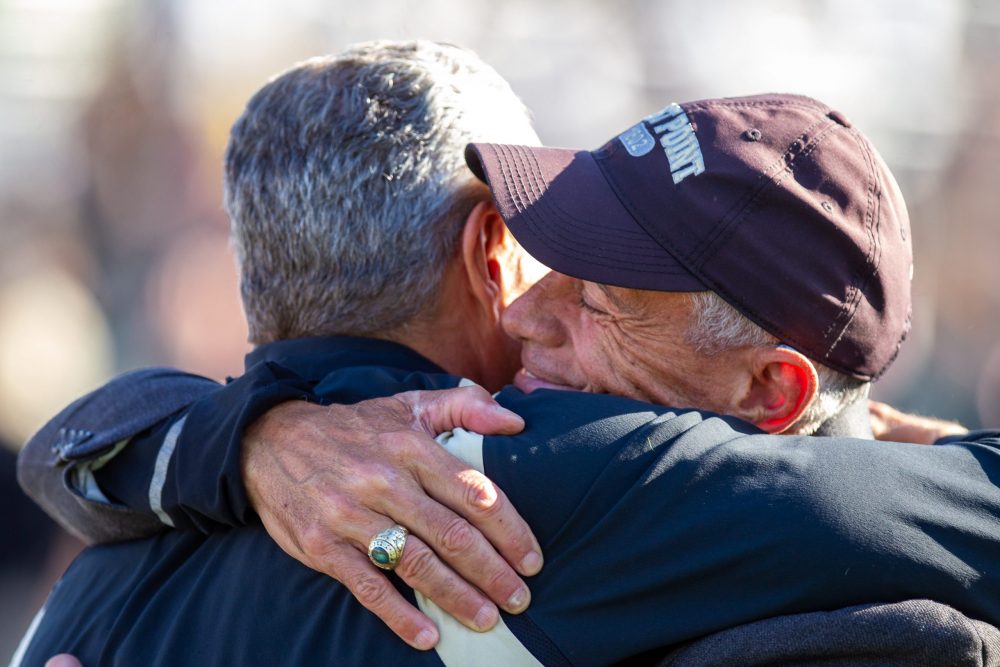 Waiting for Monken after he and the team sung the Alma Mater was former West Point superintendent Bob Caslen, the man who hired him to bring back winning to Army.

Monken and Caslen shared a hug before the coach was interviewed by Tina Cervasio of CBS Sports Network.

Caslen and his Army’s 1972 teammates were honored in the second half as the first team to win the Commander in Chief’s trophy. Kind of fitting with the CIC on the line in the Black Knights’ next game against Air Force on Nov. 5 at Globe Life Field in Arlington, Texas.

Jemel Jones improved to 3-0 as starting quarterback. It was Jones’ first start and win against an FBS opponent as Army defeated its first Division I-A opponent this season. Jones has 209 rushing yards and five touchdowns in the last two weeks. He’s averaging 7.2 yards per carry over that stretch.

Loved the patience that Jones showed getting to the outside on his 4th-and-4 touchdown run on Army’s opening drive. There seems to be an effort to get the ball to slotbacks on the outside with Jones under center. Slotbacks have rushed for 219 yards on 24 carries (9.1 yards) in Army’s two straight wins.

Army all-American linebacker Andre Carter missed his second game with an undisclosed injury. Carter had a setback in the middle of Louisiana-Monroe game week. Hopefully, Carter will return for the Air Force game with a bye this week. In Carter’s place, senior Fabrice Voyne stepped up with career highs in tackles (5) and tackles for loss (1.5).

Ay’Jaun Marshall was everywhere. That 36-yard catch along the Army sideline with two defenders in coverage was next level. Marshall downed a punt at Louisiana-Monroe 2.

Army all-American linebacker Andre Carter missed his second game with an undisclosed injury. Carter had a setback in the middle of Louisiana-Monroe game week. Hopefully, Carter will return for the Air Force game with a bye this week. In Carter’s place, senior Fabrice Voyne stepped up with career highs in tackles (5) and tackles for loss (1.5).

The decision for Army to go for a 4th-and-1 from its own 13 was a head scratcher in the second quarter. Analytics should and would have told Army to punt. Monken explained the choice in the postgame press conference as “that’s us.” The coaching staff expects the offense to be able to pick up one yard. But, a one-yard loss by Jones gifted Louisiana-Monroe points in what would turn out to be a touchdown on the next play.

Monken said the play was originally called a fullback dive but was checked to a run off tackle because Louisiana-Monroe had all of the gaps accounted.

Great to see top fullbacks Tyson Riley and Jakobi Buchanan running hard after missing some time due to injury. Think Riley, playing for the first time in three weeks, broke more than 10 tackles on his 12 carries for 90 yards. Buchanan scored for the first time since UTSA (Sept. 10).

Braheam Murphy made the one of the heads-up plays of the game, pushing Louisiana-Monroe’s Keydrain Calligan out of the end zone, forcing the safety to drop a potential interception on Army’s opening drive of the second half. Army kicked a field goal on the next play. Murphy also had a 94-yard kickoff return touchdown called back on a holding penalty at ULM’s 45.