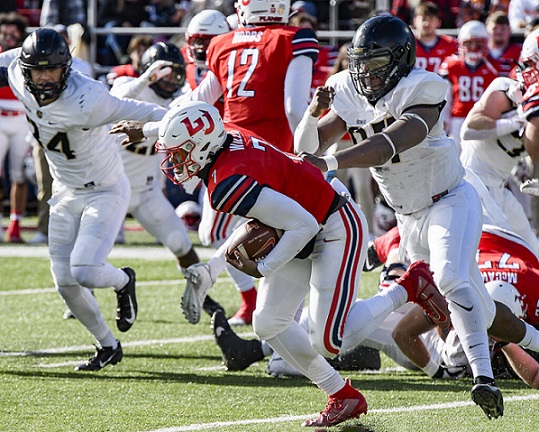 Christian Anderson’s 34-yard touchdown pass to Braheam Murphy was voted in a Black Knight Nation Twitter poll as the play of the game but there were no shortage of candidates in Army’s 31-16 win over Liberty.

JaKobi Buchanan’s 19-yard touchdown run was among the options. One Army fan commented on Twitter that “the ‘play’ of the game was the first drive of the second half: 14 plays, 75 yards, 8:15. Jakobi Buchanan 1yd TD. Broke their will!”

Zach Harding’s 54-yard punt was next-level in the fourth quarter. Couldn’t do it any better as Fabrice Voyne down the punt at Liberty’s 1. Half (15) of Harding’s 30 punts have landed inside the 20-yard line this season and 10 have gone 50 yards or more.

Andre Carter’s impact can’t be measured purely on statistics. Carter was credited with one tackle. Would be interesting to chart how many times Carter pressured Malik Willis or forced him to leave the pocket. We’ll try to have that number late this week in the breakdown.

Jabari Moore finished another Army win with a big play, picking off Willis for his fifth career interception. Remember Moore’s fourth-down pass breakup in the overtime victory over Air Force. Moore may have played his best game against Liberty, notching nine tackles.

Christian Anderson delivered his first three passes on the money and rebounded from a 2-for-12 game in UMass win. Completions to Murphy, Tyrell Robinson (51 yards) and Isaiah Alston (17 yards) were needed as Army did not have a run of 20 yards or more on 62 carries.

The return of starting center Connor Bishop from injury certainly has solidified the offensive line. Army’s coaching staff noted Bishop’s play naming him the offensive player of the week (Liberty). Jeff Monken posted on Twitter that Bishop had 17 knockdowns in the victory.

Army’s defense held an opponent without a first-half touchdown for the fifth time this season and third time in the last four games.

In Case I Missed It: Army received five points in the Associated Press poll Sunday. Five voters placed Army at No. 25 on their ballots. The Black Knights rank 32nd in the AP Poll, tied with Penn State.