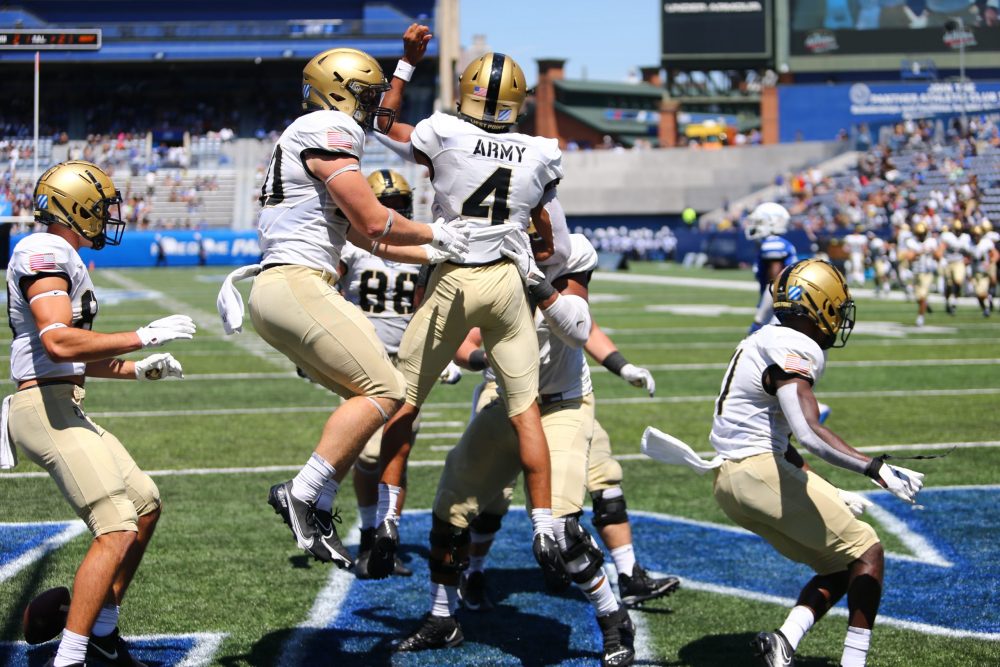 A wise man (former Army quarterback Rob Healy on the Black Knight Nation podcast) once told me that if one wants to know how successful Army’s offense is going to be just keep an eye on Army’s interior offensive line and its push.

The Black Knights’ longest run was 16 yards by A.J. Howard. The explosive plays came from the passing game and its three completions. Tyhier Tyler’s 26-yard throw to Sean Eckert (the senior’s first career catch) was smooth. And, two touchdown passes – Christian Anderson to Tyrell Robinson (40 yards) and Jemel Jones to Braheam Murphy (32 yards) – were well-executed in the play-action game and what the offense was missing last season.

Was asked when the last time two different Army quarterbacks threw a touchdown pass in the same game. The answer: Ahmad Bradshaw and Chris Carter, Oct. 15, 2016 against Lafayette.

Speaking of Anderson, the senior would be our choice for the offensive player of the game. The offense didn’t miss a beat when Anderson entered the game in the third series. Anderson knew beforehand at some point he would play in the season opener. But, Tyhier Tyler’s injury, which isn’t expected to be serious, wasn’t planned after Army’s second possession. Sure, Anderson had starting experience and played in some pressure moments most notably Army’s late game-winning drive against Air Force last December. But, Anderson made the right decisions and moved the chains on a couple of runs. And, most importantly, Anderson played turnover-free.

Army coach Jeff Monken said the defense, “played their butts off,” and credited coordinator Nate Woody for calling, “a really good game” and having players in position to make plays.

One of those players was Andre Carter. Georgia State had no answer for the 6-foot-5, 265-pound junior linebacker coming off the edge. Carter’s three sacks are tied for second in the nation with Florida’s Zachary Carter, Olakunie Fatukasi of Rutgers and Marshall’s Eli Neal. Carter isn’t just going to give Georgia State issues this season, Monken said.

“I think Andre Carter is such a great football player,” Monken said. “He’s 6-foot-5 and weighs about 265. He’s a matchup problem for everybody. I guess Power Five schools have guys like that walking around in the locker room everywhere. But, he’s a good player for us. He just always seems to come up with plays. He works really hard.

“He’s just naturally a very talented guy and he works real hard at his craft. He’s a student of the game, always asking questions and always working to prepare. He goes 100 miles an hour at practice. He wants to be a good player and he is. He’s a very, very productive football player.”

Credit freshman linebacker Brian Burton and the Army defensive staff for being ready in his first start in his first college game. Burton, who started alongside captain and three-year starter, made a tackle near the sideline on Georgia State’s opening play. Spencer Jones, Army’s projected starter at inside linebacker who has battled injury in the preseason, entered the game in the second quarter and played in the second half.

Army’s secondary was as good as advertised and did not allow the big play. Georgia State’s longest pass was 18 yards. Cornerback Jabari Moore was once again a playmaker, picking off his fourth career pass near Georgia State’s goal line at the end of the first half. Army’s second-team defensive backs held their own. Safety Quindrelin Hammonds saw early action. Cornerback Isaiah Morris knocked away a pass in the end zone.

Army held an season-opening opponent to one touchdown or less for the third straight year. Blitzes seem to throw off Georgia State quarterback Quad Brown. The absence of Georgia State’s top receiver Sam Pinckney also played a role in that.

The Black Knights’ defense allowed the second-fewest yards (177) of the week in games involving an Division I-A teams. Kentucky held Louisiana-Monroe to 87 yards.

Now, let’s talk to special teams. Army might spend more time on special teams than anyone in the country. Monken said that the team practiced almost every special teams scenario in its final scrimmage. Have a feeling that it might be the same this week after two straight botched punt returns.