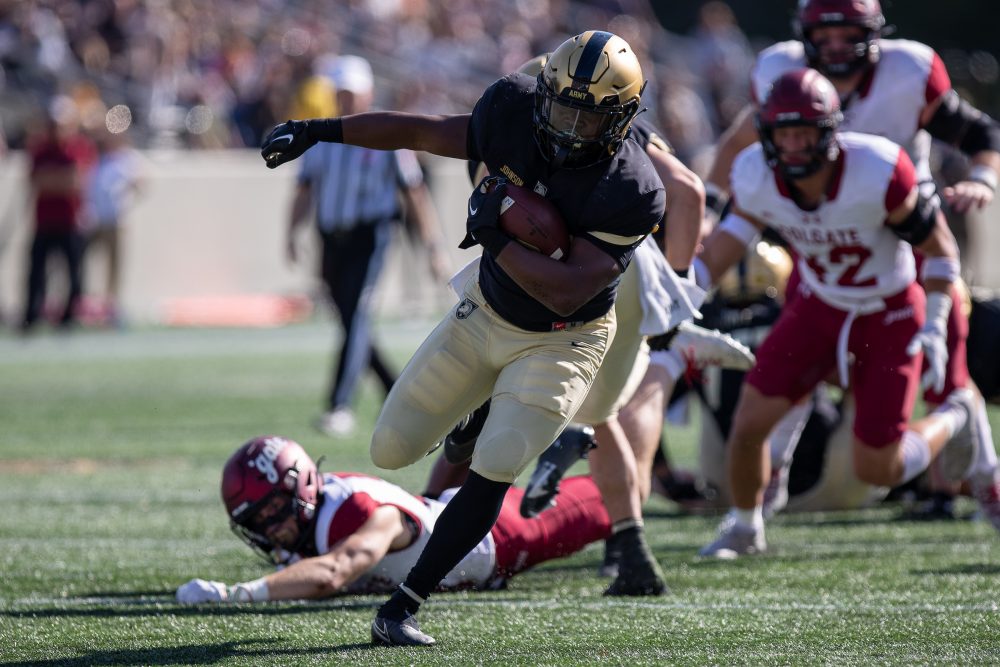 Army’s “new season” has some momentum after a 42-17 win over Colgate.

Coach Jeff Monken told his team it to start with a clean slate the day after the Black Knights’ loss to Wake Forest dropped Army to 1-4.

If Army is going to turn this season around, it has to look more like the second half team than the first half against the Raiders, especially on the defensive side.

The Black Knights opened the third quarter with a 16-play touchdown drive. The defense held Colgate scoreless in the second half after allowing four plays of 19 yards or more in the first half.

When was the last time that Army had its first play from scrimmage go for a touchdown? Have researched back to 2015 season and have yet to find one.

Army won its seventh game without completing a pass in the Jeff Monken era.

The future at the fullback position looks bright. Freshman Hayden Reed and sophomores Markel Johnson, Jarel Dickson and A.J. Williams took every snap, giving veterans Jakobi Buchanan and Tyson Riley, who were in uniform, a much-needed game off. The quartet combined for 220 or Army’s 453 rushing yard with Reed topping running back with 87 yards in his second straight start.

Yes, Army was playing without Andre Carter, the academy’s single-season sack record holder, but the Black Knights’ pass rush has to be better. Army only sacked Colgate’s Michael Brescia once on 26 attempts.

Speaking of Andre Carter, junior linebacker Leo Lowin intercepted his first career pass and forced a fumble Saturday. He’s the first Army player to pick off a pass and cause a fumble in the same game since Carter did it against Georgia Southern on Nov. 21, 2020.

Appreciate the impact of former punter Zach Harding more and more as the season progresses. Punting isn’t easy. Army’s punters have struggled with short kicks off the side of their foot, or just short punts in general. Billy Boehlke and Matt Rhodes combined for an average of 15.5 yards on two punts. Army ranks 121st in net punting (34.7 yards per kick).