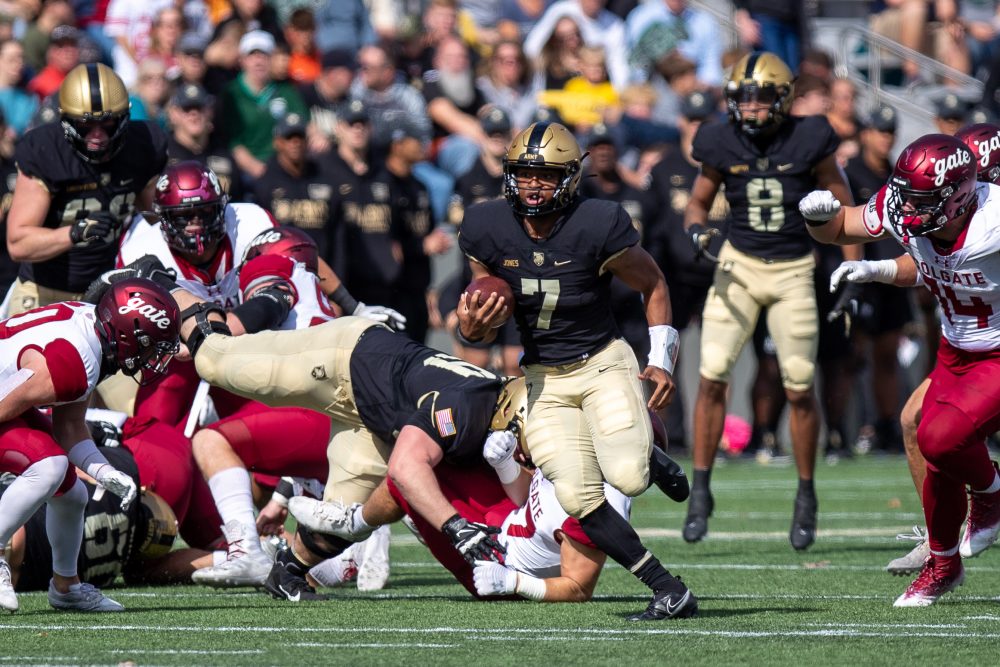 Jemel Jones followed fullback Hayden Reed through the line and found daylight into the heart of Colgate’s defense.

Jones sprinted toward the end zone and received a blocking escort from receiver Cole Caterbone.

Didn’t take long for Jones to make an impact in his second career start. The senior quarterback’s 75-yard touchdown run started Army’s scoring on its first play from scrimmage.

The Black Knights rushing attack continued to stack touchdowns in a 42-17 win over FCS Colgate.

“This entire week of practice we just talked about starting fast and we really carried that into the game,” said Jones, who was making his first start since Oct. 10, 2020 against The Citadel. “We learned a lot from last week and watching the film against Wake Forest and we cleaned up a lot of things that we saw in today’s game

Jones said coordinator Brent Davis told the offense of Army’s first play call earlier in this week but didn’t predict a touchdown. The coaches informed Jones that he would be starting yesterday. Jones won the weekly competition over senior Cade Ballard. Ballard aggravated a finger injury during Friday’s practice and was unavailable for the game.

“I just wanted to approach it the same way that I approach any other game,” Jones said. “I felt like I was well prepared. I believe in the game plan that we have from coach Davis. It was a great game plan. I knew I just had to go out there and do my job and execute the offense the way we know how to do.”

Jeff Monken put the offense in the capable hands of Jones.

“Jemel is a professional,” Monken said. “He prepares and practice daily if as he’s the starter. He really takes that responsibility to heart. He knows the offense. He knows the checks. He steps in the huddle and takes command. He has the respect of our team. I’m just really pleased to see him go in there and perform so well. He ran the ball hard. It was great to see that first play and so him pop out of there for 75 yards.”

Army’s defensive effort wasn’t good enough in the first half. Colgate kicked a field goal on its first drive and threw a touchdown pass with 23 seconds left before halftime. The Black Knights blanked Colgate the rest of the way. Junior linebacker Leo Lowin intercepted a pass off Nate Smith’s pressure and forced a fumble.

Both of Army’s victories have come against FCS competition. The Black Knights look for their first win over an FBS school against Louisiana Tech Saturday at Michie Stadium.

“Hopefully, the feeling of winning is going to be contagious,” Monken said. “They know how much it hurts when we lose and hopefully having that feeling after a win, they are going to be fighting with everything they got to try that feeling again next Saturday.

“We are a 2-4 football team that is desperate to win. Every game at this point is like the playoffs for us. We got to play every week and play our best. Our guys don’t ever look ahead of what’s right in front of them.”