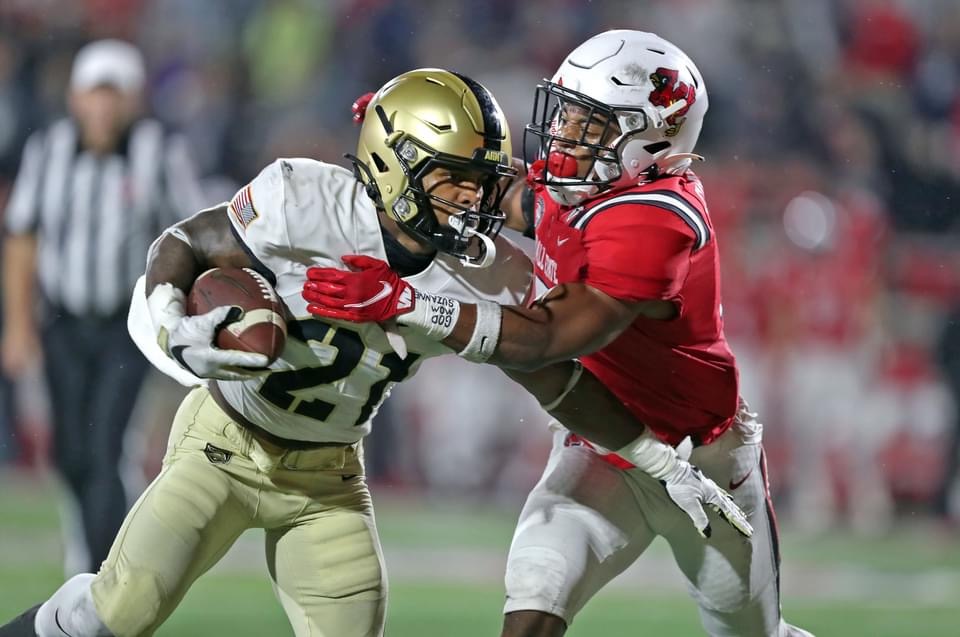 Army's rushing game was held in check by Ball State in the second half. Photo by Danny Wild.

Truth be told was researching Army’s biggest comeback during halftime.

After falling behind 21-0, the Black Knights entered the locker room with momentum – two straight Tyhier Tyler touchdowns and Nate Smith’s sack to close the first half.

Army was receiving the second-half kickoff and all it needed was another clock-chewing touchdown drive to tie the game. Just wasn’t meant to be as Army moved the chains only twice on its first five second-half possessions.

Mentioned this on the Black Knight Nation Postgame Reaction podcast below that maybe Ball State spotted something on the film from Miami (Ohio) last week. Looked like there were four Ball State defensive linemen from guard to guard at times, plugging the middle and dictating where the ball would go – either outside or passing the football. The battle in trenches was simply won by Ball State’s defensive line.

The number of Army rushes of two yards or less are eerily similar in both games – 26. Six negative rushing plays didn’t help matters against Ball State. Army was behind “schedule” on all 11 of its drives.

Army’s 63 rushing yards was the lowest production from fullbacks since West Virginia held the Black Knights to 53 yards in the 2020 Liberty Bowl.

This game exemplified how much of a jump senior Christian Anderson has taken this season. Without Anderson, who was injured against Miami (Ohio), Army’s offense lost the dimensions of the play-action pass and quarterback edge runs.

Count me in as being shocked and surprised about the start of the game. Predicted Army to win 35-10. By the end of the first quarter, Ball State had scored more than half of the points (21) it combined to score (37) in its three losses to Division I-A teams.

Ball State all-time leading receiver Justin Hall’s 99-yard kickoff return TD was no doubt a rough way to start the game. It was the first time that the Black Knights have allowed a first-quarter touchdown since Georgia Southern last November (seven games). But, Army getting denied on a fourth-down quarterback keeper from its own 44 added flame to the fire on the next possession. Credit Ball State offensive coordinator Kevin Lynch on catching Army’s defense off guard with a great call of throwing deep for 45-yard touchdown on the next play.

Army fullback Jakobi Buchanan converted his team-high (and probably nation-leading) seven and eighth fourth downs. Surprised that Buchanan wasn’t in the game for third and fourth down from Ball State’s 2 on Army’s final drive with less than four minutes left. The Black Knights were in a 2-minute offense with two timeouts and needing two touchdowns to tie. Army tried fullback Cade Barnard up the middle on third down for no gain and then ran Tyrell Robinson outside for a loss of 1-yard on fourth down.

Army quarterbacks threw their first interceptions of the season and both were costly and could have been prevented. Under heavy pressure, Tyler didn’t throw a pass away enough that was picked off by Trenton Hatfield late in the third quarter. Jemel Jones forced a pass into coverage that was intercepted by Bryce Cosby. Believe Jeff Monken was referencing this play when he said wide receiver Ryan Jackovic was wide open on the play and would have likely scored if a pass was delivered.

Also, Army missed or couldn’t complete passes to wide open receivers on multiple opportunities. Tyler couldn’t connect with tight end Chris Cameron down the seam and Brandon Walters couldn’t bring in a pass from Jones on a wheel route.

Thought once Jones settled in he made a couple of nice throws in the 2-minute offense. The back shoulder throw to Robinson 21 yards was placed perfectly near the sideline.

There was some good Army football news over the weekend.

Former linebacker Jon Rhattigan recovered his first NFL fumble for the Seahawks that shifted momentum in a win over the 49ers. Gregg Bell of the Tacoma News Tribune (a West Point graduate) reported that the ball from the fumble recovery was kept by a Seattle equipment manager and given to Rhattigan. Pretty cool.