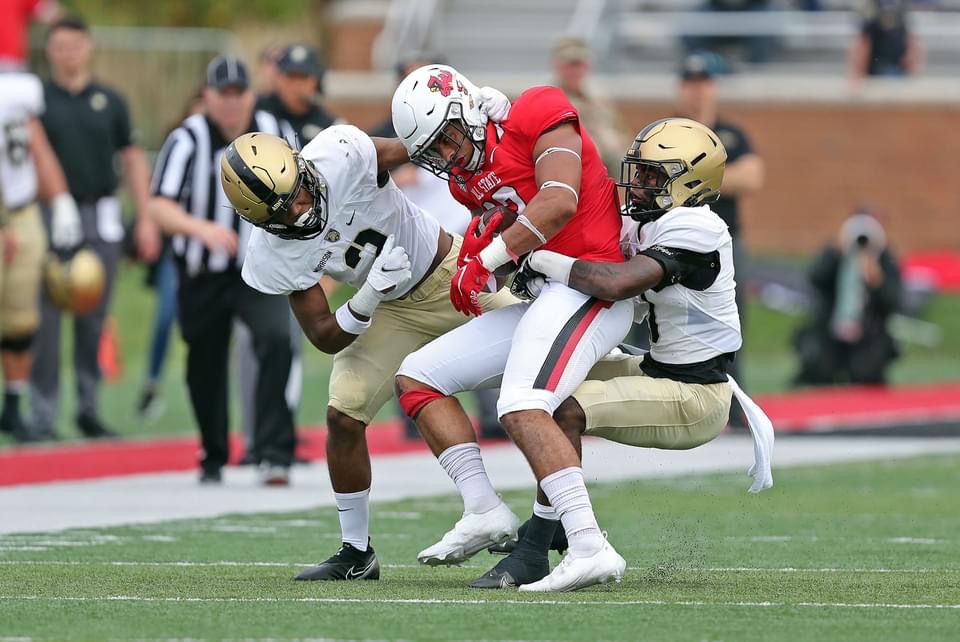 Army received a gut punch from Ball State in a blink of eye Saturday.

Justin Hall returned the opening kickoff 99 yards untouched to the house. Ball State struck again on its first offensive play as Drew Plitt hit Jayshon Jackson with a 45-yard touchdown pass after Army failed on fourth down. The Cardinals added another touchdown on its next possession.

Down 21-0 in the first quarter, Army recovered and took momentum into the locker room on consecutive touchdowns by quarterback Tyhier Tyler and Nate Smith’s sack.

But, the Black Knights’ offense couldn’t put a drive together when it mattered in the second half. Five straight times, Army’s defense stopped Ball State and handed the offense a chance to tie the game. The Black Knights would never find an equalizing play as Ball State handed Army its first loss of the season 28-16.

“That was a good, old fashioned butt-whipping,” Army coach Jeff Monken said in his opening postgame statement. “Not much else to say other than that. Poor job on my part having our team prepared and ready. We didn’t execute very well. That’s the result. Give Ball State credit. They really played hard. Their kids played well and earned the victory.”

When asked about how disappointed he was about the setback, Monken said, ” I can’t describe the disappointment. No words to describe it.”

There’s plenty to fix as Army (4-1), a 10-point favorite, enters a bye week. The absence of starting quarterback Christian Anderson, who missed the game due to injury, was felt as Ball State loaded up near the line, daring Army to pass.

The strategy worked as Ball State especially in the second half when the Black Knights were held to 61 yards on 26 carries and threw two drive-killing interceptions of the season by Tyler, who started for Anderson, and Jemel Jones. Army fullbacks were limited to 17 carries for 63 yards. And, the Black Knights missed wide-open chances in the passing game.

For the second straight week, Army had 26 carries of two yards or less and were tackled for a loss six times. Ball State turned Tyrell Robinson back for a yard loss on fourth down, ending Army’s chances to make the game interesting with 3:15 left.

Hall’s kickoff return marked the first time Army had trailed this season and the first points scored in the first quarter against the Black Knights.

“The kickoff return for a touchdown to start the game, there’s just no excuse for it,” Monken said. “Just a poor job of us putting our guys in position. We had a guy who was a free hitter that nobody blocked him and he just ran by the ball. I know he was trying to make a play. He just didn’t make a play. That was the whole story of the game.”