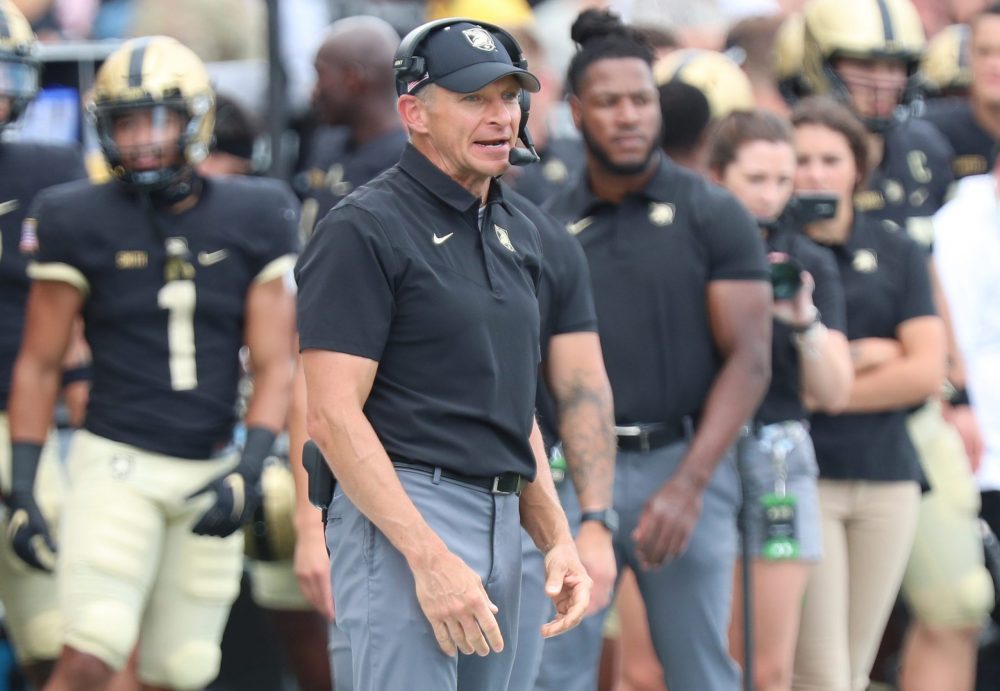 The feeling may never go away. Losing is not something that Monken can simply shrug off.

“I’ve told you guys before, I still lose sleep over games we lost three years ago and 13 years ago and 23 years ago,” Monken said during his Monday press conference after a 28-16 defeat. “So, three days ago, I’m still pissed and I’m going to remain pissed. That’s just who I am and hopefully, our guys will feel a little bit of sting. I think it’s OK to have that.”

Monken said the sting represents a competitiveness to improve and that is what Army will focus on during its bye week before the Black Knights’ game at Wisconsin on Oct. 16.

“A guy that walks out of the locker room and everything is fine (and thinks), ‘Oh well, that’s the way it goes and put it behind us,’ I don’t know if that’s a guy that is very competitive,” Monken said. “You show me a good loser and I’ll show you a loser. It’s OK to be competitive. I think our guys will focus on the next game. They are not going to dwell on the past game. But there’s some things to be learned from and I know they are going to be excited to have an opportunity to play again.”

What went wrong at Ball State? Monken went in depth on some of the mistakes. He said Army’s opening kickoff that was returned 99 yards for a touchdown wasn’t kicked, “where we should kick it,” and “there were plenty of guys out of position.”

“We did a poor job covering the kick,” Monken said. “That’s as much my fault than anybody’s. The kid was good kick returner and we wanted to give our guys a chance to go down and cover somebody else and see how it changed their kickoff return and he got his hands on it. We should have had guys in position and we didn’t.”

Monken said Army didn’t get the fourth-down play on its opening drive, “communicated quickly enough from the huddle to the line (of scrimmage) so he called a timeout. Quarterback Tyhier Tyler was stopped short of the sticks when Army returned to the field.

“Frankly, we didn’t do a very good job on that play and it just seemed the whole day went like that,” Monken said.

The bye week is coming at a good time as Monken said he felt like his team, “looked fatigued and a little worn down physically” during its fifth straight game.

“I think that’s where we’re at in the season so hopefully this bye week will help us get some needed rest and get healthy,” Monken said. “Obviously, just look at us out there, we’re depleted a little bit at some positions and don’t look exactly the same as we did in Week 1 and as a result I don’t think we looked as fresh and as ready to go physically as we had.

“That didn’t mean we needed to lose the game. That’s not uncommon for a lot of teams to feel that way at this time of the year. Hopefully, that’s something we can regain this week is just a little more of that energy and good health.”

Monken said Tyler was not necessarily removed due to injury in the second half for Jemel Jones. Coaches wanted to see if another quarterback could complete passes that Ball State was daring them to throw.

“If you saw the game, he got rocked several times,” Monken said. “He was taking a pounding and you do in our offense. You are going to take some hits, get tackled and take some shots. He had his chance to try to hit some open receivers and just felt like we needed to give Jemel a chance to see if he could hit the open receivers. As it turns out, we weren’t as effective as we had hoped there either.”

Monken said Ball State was giving Army the perimeter running game but Black Knights missed blocks or blocked the wrong guy on the outside. He also said that Tyler got, “a little guy shy” on pitch plays after one of his first was knocked down.

“The next couple, he had a chance to pitch it and he didn’t,” Monken said. “He’s trying to make a play and he’s trying not to have a big negative yardage play like we did. We talked about it. He’s got to put it behind him and just make the play that is there and we didn’t do that enough.”

The hope is for Army to have both quarterback Christian Anderson and starting center Connor Bishop back for the Wisconsin game, Monken said.

Bishop, who has missed the last three games due to injury, has “made a pretty good turn” in his rehabilitation, Monken said.

“He looks good,” Monken said. “He’s walking around and moving around. We’ve had him in the training room and they’ve been doing some things with more and more body weight to get him healthy. I’m optimistic that we are going to get him back fairly quickly.”

As far as Anderson, Army’s leading rusher, Monken said, “We will just have to see. It would be nice to get him back for the game against Wisconsin but his body has to cooperate and we’ll see if it does.”