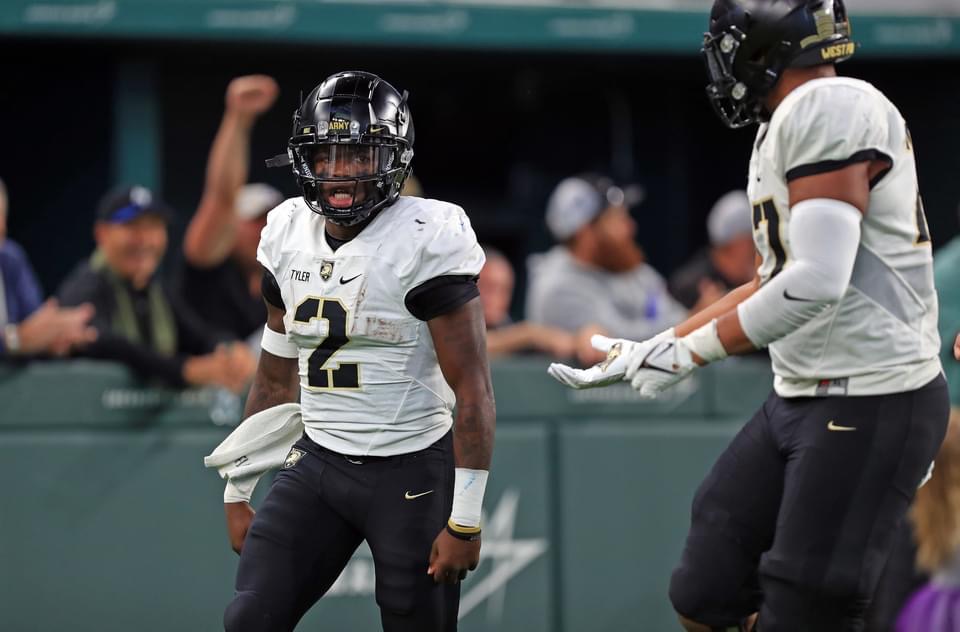 Jeff Monken reminded his players of four keys to successful football in the winning Army locker room as greats of the storied program listened.

All four qualities were on display in overtime as Army earned another hard-fought victory over Air Force.

Could make a case for Army’s offensive line as the game’s MVPs. Starting tackles Boobie Law and Mason Kolinchak impacted the outcome with Boobie Law’s game-winning fumble recovery touchdown in the end zone in overtime and Mason Kolinchak aiding Tyhier Tyler over the goal line for the Black Knights’ first touchdown. Law overwhelmingly won a Black Knight Nation Twitter poll for the play of the game.

The victory gave Army its fourth win in the last five games over Air Force. That’s only happened three times in the series and not since 1980.

Army passed for more yards than it rushed in a winning effort for the first time since the Michie Stadium Miracle game against Tulane on Oct. 6, 2007. That game was also won in overtime.

Christian Anderson and Tyler combined for 214 yards through the air and there was more opportunity out there if Army chose to pass. Thought Isaiah Alston was going to reach double-digit catches with the Black Knights’ first-half success throwing the football. Alston, who has caught a pass in four straight games, had four catches for 77 yards. He had 13 catches for 256 yards during the four-game stretch. Tyler completed his first pass (39 yards to Tyrell Robinson) since the season-opening win over Georgia State

The Black Knights had just two runs of 10 yards – both by slotbacks Tyrell Robinson and A.J. Howard – among their 43 carries.

Andre Carter’s play continues to trend next level. Not going to find a more athletic and instinctive play by a linebacker than Carter’s tip that landed in the hands of cornerback Cam Jones for an interception. Carter recovered from the trick play and misdirected the pass.