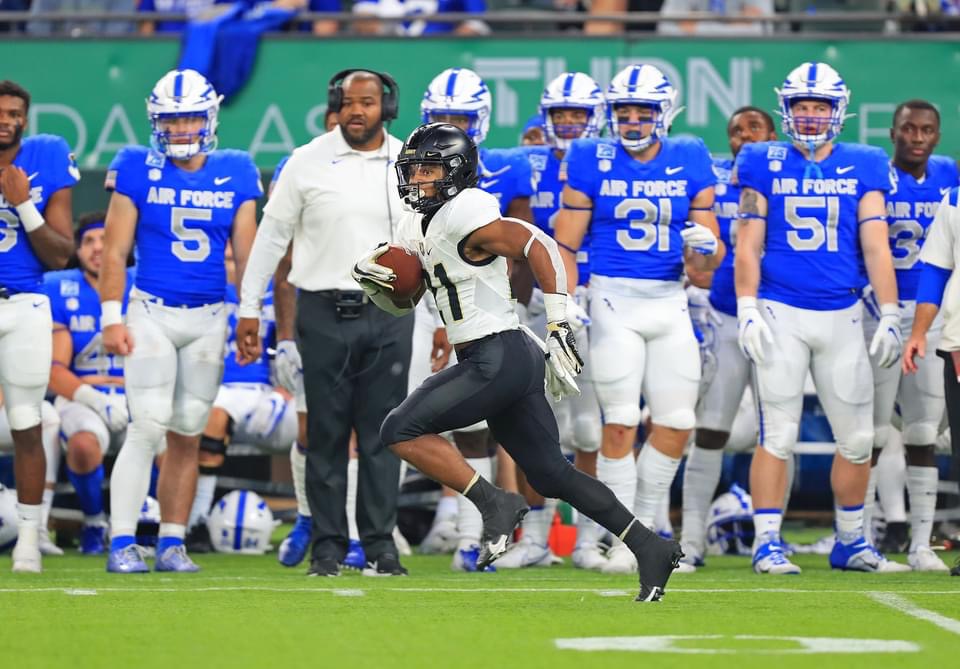 Jabari Moore was still receiving congratulations as he walked toward the Corps of Cadets for Army’s alma mater.

The Black Knights were singing second again after Moore sealed a 21-14 overtime victory over Air Force at Globe Life Field in Arlington, Texas.

There’s something about Air Force that makes Moore rise to the occasion. Last year, Moore intercepted Haaziq Daniels in the end zone that sparked a rally in a three-point win. This time, Moore perfectly timed a fourth-down pass from Daniels and knocked it away. Moore put his arms in the air as if they were the wings of airplane and celebrated with his teammates as Army secured the Commander in Chief’s trophy for the fourth time in five seasons.

“It was a great feeling,” said Moore, a junior cornerback. “I thought last year when we won the CIC was going to be one of the greatest moments of my life and this year, it just build upon that especially to get that win for the seniors. This is their last time facing Air Force and we just had to come away with the ‘W'”

For the first time in the 56-game series, Army and Air Force played into overtime and it was unlikely offensive hero that provided the scoring difference. Sophomore tackle Boobie Law alertly fell in quarterback Christian Anderson’s fumble in the end zone for a touchdown at the start of the extra session.

“It’s very surreal,” Law said. “Never in my life would I’ve thought I would pick up a fumble and score a touchdown especially in a game like Army and Air Force. I’m just happy that I was able to be in the right place at the right time to help my team win.”

The victory wasn’t Army’s usual formula for success. The Black Knights threw for more yards (214) than it rushed (102). Air Force ran 17 more plays than Army (73-56). The rivals played to a scoreless draw in the first half as Army’s defense forced Air Force to punt on its first three drives and stopped the Falcons on its final possession of the half.

Tyhier Tyler and Army opening the second half with a touchdown drive. Tyler’s effort and assist by tackle Mason Kolinchak led to the quarterback’s 9-yard scoring run. Tyler completed his second pass of the season and first since the season opener against Georgia – 39 yards to Tyrell Robinson – to push Army into scoring position. Robinson hooked up with Christian Anderson on a 79-yard pass for Army’s second score.

The Black Knights (5-3) appeared in control after an athletic play by linebacker Andre Carter fell into the hands of cornerback Cam Jones for an interception with a 14-3 lead in the third quarter. Carter recovered off a trick play and tracked down Daniels, who was the intended receiver, to tip Dane Kinamon’s pass.

Army couldn’t cashed in on the turnover as Brandon Walters was stopped on 4th-and-3 from Air Force’s 43. Air Force (6-3) would score the next 11 points to force overtime.

While Army was fortunate enough to receive some luck on Law’s fumble recovery, the Black Knights’ defense would make enough play to snap a three-game losing streak and post their first win since Sept. 25 – a 41-day stretch. It was Army’s first overtime victory since Miami, Ohio (31-30, 2 OT, Oct. 20, 2018).

“It was a team victory,” Monken said. “There wasn’t one guy that made all of the plays to win. It took a great team effort to win.

“It had been six weeks since we won a game. It feels like forever. So, it was great to win and it’s particularly great to win that game, to win a rivalry game and one that you are playing for an incredibly coveted trophy and a chance to go to the White House if we win the next one (Navy, Dec. 11). That’s a big deal.”

Holding Army’s Black Flag in the locker room, Monken started the team’s rallying cry, “I gonna fight until I can’t fight no more.”

“I love this team,” Monken said. “They are tough. They are tough as nails and it’s that mental toughness. I don’t just mean physical toughness. You can’t be physically tough unless you are mentally tough and they are. They never stopped believing that they were going to win.”