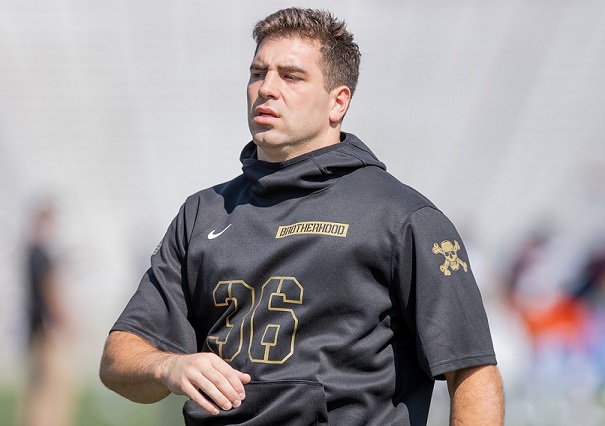 Peyton Hampton’s leadership shines through as he spoke about the state of Army football this week.

Hampton, a senior linebacker, talked about staying focus and strong for his teammates as the Black Knights sort through a 1-3 start.

“This season is far from over,” Hampton said. “We’ve played four games out of what hopefully will be 13 (referring to a bowl game). There’s a lot of time to turn this thing around. This season is not down the drain. We have a lot of time to make it up. We know we are a good football team. We just have to play like it every single Saturday.”

Army’s next game presents an incredible opportunity. Leaving Wake Forest with a victory Saturday night would be a gigantic step in the right direction. The Black Knights are currently a 16.5-point underdog to the No. 15 Demon Deacons.

Wake quarterback Sam Hartman, who threw for 458 yards and five touchdowns in that game, is back after missing the Demon Deacons’ opener recovering from a blood clot. Hartman’s 15 touchdown passes (in four games) are tied for sixth in the country. He’s thrown only two interceptions on 134 attempts.

Stat of hope: Wake has allowed 195.5 rushing yards per game. Army is the country’s No. 2 rushing team. Fullbacks Jakobi Buchanan and Tyson Riley has played through injuries. If Wake tries to take away the fullback, others, whether it’s quarterbacks Tyhier Tyler and Cade Ballard or slotbacks Tyrell Robinson, Ay’Jaun Marshall, need to step up running the ball. Also, remember wide receiver Isaiah Alston had a three-touchdown game against Wake last year.

Sal Interdonato (Black Knight Nation): Wake Forest 45, Army 31. Army’s recipe for keeping this game close is all about ball control and time of possession. Limit the amount of Wake Forest possessions and give the Black Knights’ defense a chance. With that said, I think Sam Hartman and the Demon Deacons have too many offensive weapons.
Seth Mendelson (Black Knight Nation): Wake Forest 56, Army 13. The Demon Deacons have improved both offensively and defensively from last year when they won a shootout 70-56 on Army’s home turf. Army is weaker, much weaker than last year. Wake scores early and often in this game.
Brendan in Jersey: Wake Forest 49, Army 28. If Army can beat the spread on this one and finish even two scores behind Wake, I’ll consider that a positive sign but the hard truth is that Wake has only gotten better as a team since these two met last year and Army has significantly regressed. Army might have had a chance without Sam Hartman opposing them at quarterback. He’s back and probably hasn’t peaked this season.