Army routed by No. 15 Wake Forest 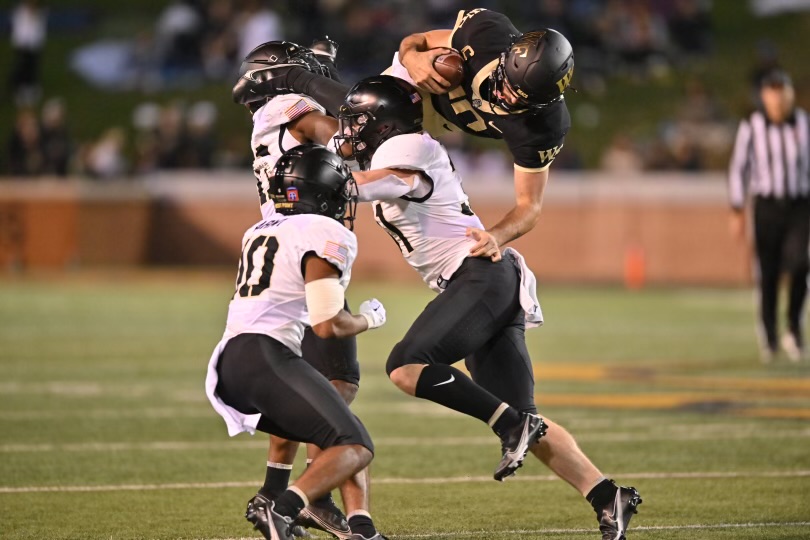 Army’s offense followed its plan as scripted to open at No. 15 Wake Forest.

The Black Knights moved inside the Demon Deacons 20-yard line with the help of Tyhier Tyler’s 47-yard pass to Tyrell Robinson on the game’s second play. The drive came to a crashing halt as fullback Jakobi Buchanan lost a fumble at Wake 9.

Army needed to play near-perfect football to challenge the Demon Demons. The red-zone turnover was a sign of times to come in a 45-10 loss to Wake.

“It hurts to stomach,” said junior wide receiver Isaiah Alston said. “We get that close we have to punch in it and put points on the board. Maybe, you are looking at a different ball game.

“We shot our selves in the foot today on little things and we could have all played better including myself. I made some mistakes. I wish we could get it back. But, the reality is it’s over. We have to put it past and move forward.”

Wake Forest and quarterback Sam Hartman didn’t skip a beat early, effectively moving the ball on the ground and scoring touchdowns on its first two drives. Hartman, who passed for 458 yards in a win over Army last year, was an efficient 13-for-19 for 246 yards and a 26-yard touchdown pass to A.T. Perry on Wake Forest’s first second-half drive. Army’s defensive game plan was to limit the big plays, senior linebacker Peyton Hampton said.

“We weren’t successful in stopping the run and that’s something we have to do if we want to win games,” Hampton said.

Mental errors and miscues continued for Army. A Wake Forest kickoff hit at the 2-yard line on a fair catch call due to a miscommunication. The Black Knights had another red-zone turnover when quarterback Cade Ballard threw an interception trailing 21-0 with four seconds left in the first half. Army was shut out in the first half for the second straight game.

Army fell to 1-4 as injuries continue to mount. Robinson needed to help of trainers to leave the field with an apparent knee injury during Army’s opening second-half drive.

“I think we have tough people and tough kids and they are brought up in this program and this environment at West Point to be tough and to be resilience,” Monken said. “We are going to find if we are and see how we respond. We can react and point the finger and blame others, scratch our head. The blame is on us. We are the ones responsible for it, me more than anybody.”

Army was called for two straight false-start penalties on its opening drive. Monken said Wake Forest “was calling out verbal signals that were similar to our snap count.”

“After it happened twice, I talked to the officials and they talk to the other team and they had to change the verbal signal that they were using to shift their line.”

Alston finished with career highs in catches (7) and receiving yards (123). He recorded his second 100-yard game, both against Wake Forest.

Jones threw for 100 yards, all to Alston.