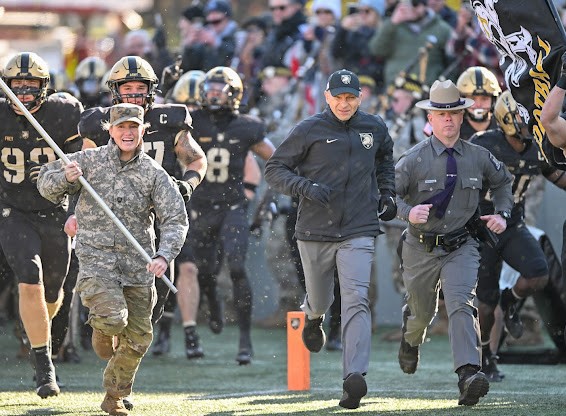 Army is a 20-point road favorite against 1-10 UMass Saturday.

It’s the same position the Black Knights were in last season as a 36-point favorite against the one-win Minutemen. Army needed a strong fourth quarter to pull away with a 33-16 win.

UMass brought back Don Brown, who had success when the school was Division I-AA, as its head coach this season. The Minutemen have only defeated FCS Stony Brook. UMass has scored 10 points or less in six of its losses including a 20-3 loss at Texas A&M, which may have been its defense’s best effort of the season, last week.

The Black Knights seek their first win away from Michie Stadium this season.

Army’s best source for game planning against the UMass defense may be Nate Woody.

Woody, Army’s defensive coordinator, worked as an analyst for Brown when he ran Michigan’s defense against the Black Knights.

As for Army’s defensive staff, Nate Woody and his assistants have been busy diagnosing UMass’ multiple looks this week.

“Coach (John) Loose said this is the best 1-10 team that he’s ever seen,” Woody said. “I agree with him 100 percent. These guys have outstanding pass routes and combinations, run game formations, motion. Everything you want to be successful in an offense, they’ve put together in a package and it makes it harder on a defensive guy.

Woody added, “Throw the record out. This is a game that you really have to play downhill, defend a variety of pass combinations. If you don’t get pressure on the quarterback, it’s going to be a long day and if you don’t get that tailback before he gets a head of stream, then lights out.”

Sal Interdonato (Black Knight Nation): Army 38, UMass 14. Army will keep momentum going with Navy on the horizon, Expect a faster offensive start from the Black Knights with the help of another multi-takeaway game from the defense.
Seth Mendelson (Black Knight Nation): Army 42, UMass 10. The Black Knights are not looking ahead to Navy. Instead, they get down to business and play off their win over UConn to hand it to the Minutemen. And, Army plays four quarterbacks doing it.
Brendan In Jersey: Army 42, UMass 17. UMass did an admirable job beating a big spread against Texas A&M at Kyle Field last week, but I think the Minutemen have shot their last musket ball this season. Army is a three-touchdown favorite, and I think they cover as a favorite for the second consecutive week. They’re still fighting for a measure of respect and I suspect there will be a majority of Army fans in the stands.
Steve Kriepe (Crawdad’s Countdown to Kickoff): Army 31, UMass 14. Army will pick up where it left off against UConn with the potential to easily cover the 20-point spread – given that the Minutemen are a decidedly weaker team than the Huskies. However, with the game well in hand at halftime, Monken will ensure the starters are healthy for Army-Navy by getting the reserves into the game in the second half.