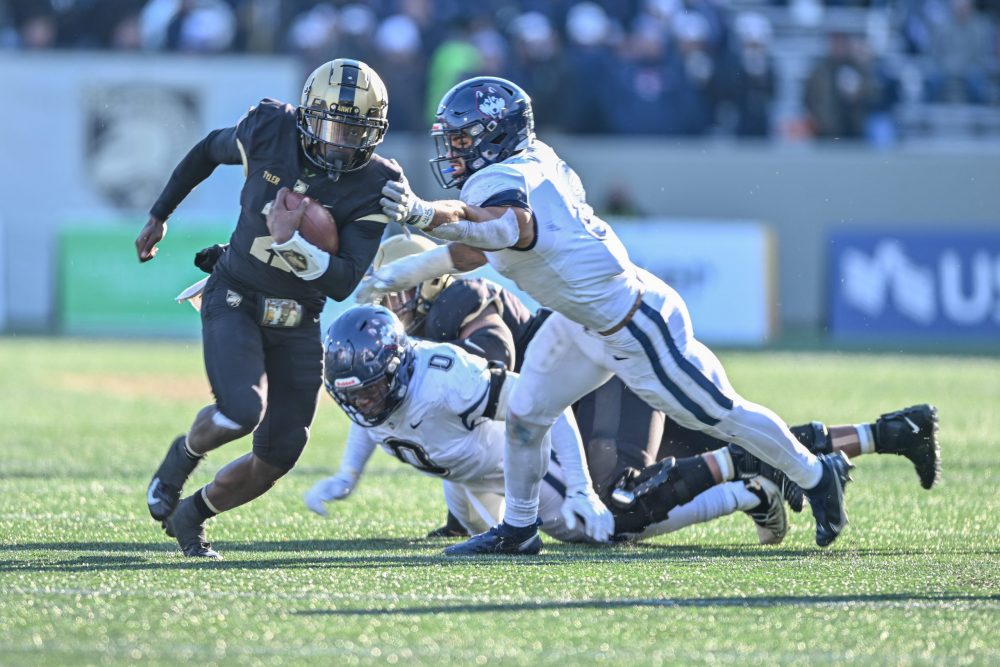 Tyler scored his 20th and 21st touchdowns in the second half of the Black Knights’ 34-17 win over UConn last week, tying him for fourth with Angel Santiago.

Tyler’s Army career has been defined by his toughness, character and leadership. Those qualities has never wavered through a second straight season of multiple quarterback use. In many ways, Tyler has beaten the odds, going from a recruited quarterback to a slotback and back under center for his first career start against Texas-San Antonio in 2020.

“He’s been that way his whole career,” Army offensive coordinator Brent Davis said. “He’s pushed through adversity always. He’s very mentally tough, physically tough as you see with the way he runs and the shots that he takes. His maturity and how much he’s grown over his time here (has been something to watch). (He’s) just an unbelievable guy, character and leader for us. He’s an inspiring guy in the huddle. Guys really believe in him. He’s just such a competitor and I love watching him play.”

“TT is one of my favorite people to block for, just the way he’ll lower his shoulder against a linebacker and not think twice about it,” Army senior center and captain Connor Bishop said. “It’s awesome and it’s inspiring to watch when you are on the field. That’s what I’ve grown to expect from him.”

Tyler has at least two games left to add to his career numbers, starting with today against UMass. He’s one rushing touchdown away from becoming the fifth Army quarterback to reach double-digit scores in a season, joining Trent Steelman, Ahmad Bradshaw, Kelvin Hopkins and Santiago. Tyler’s 1,564 rushing yards rank 30th in academy history.

Army coach Jeff Monken listened to Tyler speak to the media after the UConn win. Tyler’s mention of teammates over himself continued to impress Monken. That’s Tyler. He plays football for the love of the game and his teammates.