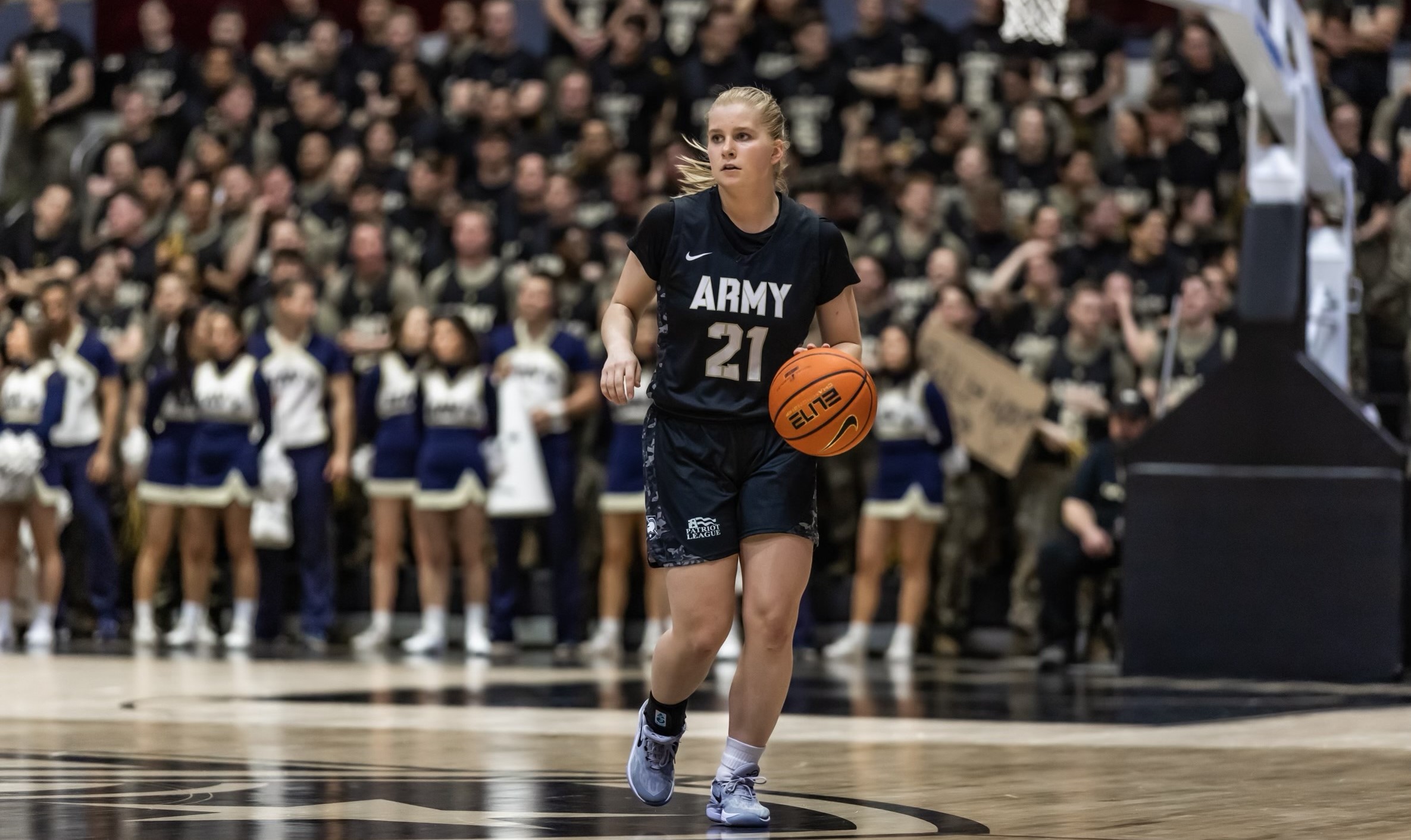 Reese Ericson sang along with Blink 182’s “All The Small Things” as she walked toward the Army’s bench during a replay turnout.

Ericson, Army’s freshman guard, was soaking in everything she could in her first Army-Navy game.

“Say it ain’t so, I will not go, turn the lights off, carry me home,” Blink 182 lyrics rang through Christl Arena.

Whether it was crossing up a defender with her dribble or hitting a pullup jumper, Ericson was thriving in the pressured-filled atmosphere.

Ericson’s energy and senior Sabria Hunter’s play and leadership helped Army pull away from Navy in a 75-61 win. Ericson finished with a career-high 24 points off the bench and Hunter added 23 points and 17 rebounds for the Black Knights (6-12, 4-4 Patriot League).

“Just waking up you have to be in the same rhythm (as any other game),” Ericson said. “We had the shoot around as a team, just trying to keep it as normal as you can but it’s hard to do that when you have all of your friends and all of your family coming out. It’s truly an amazing experience and I’m very grateful to be here.”

Ericson drained a 3-pointer for the left corner for a dagger with 4:25 left. As Ericson was retreating for defense, the cadet section behind the basket chanted, “She’s a plebe (freshman).” Fittingly, the ball ended up in Ericson’s hands to dribble out the clock in her best college game to date.

Navy coach Tim Taylor may have summed up Ericson’s performance the best.

“Moment wasn’t too big for her,” Taylor said.

It’s almost as if Ericson was born to play in these big games for Army.

She’s been thinking of playing for the Black and Gold since eighth grader. Ericson’s close friend talked about attending Navy. Ericson knew she’s wanted to go to West Point.

“Two little eighth-graders in (Lake Oswego) Oregon are fighting over Army-Navy basketball, soccer, lacrosse,” Ericson said. “It goes so deep and touches all parts of the country.”

“My sister came here and she was a big part of that,” Ericson said. “Getting to hear her experience and she got amazing opportunities. She went to Thailand, had internships at Walter Reed (Hospital) and George Mason. She’s super high achieving. I was trying to be like her.

“I started reaching out to coaches and after reaching out with them and the team. It was a done deal. I stopped talking to other schools. I had a couple of other offers but this was it once I came on my visit.”

“She was special (today), incredible poise,” Traversi said. “What I love about Reese is that she didn’t get too high or too low. That’s something that we constantly talk about with our point guards  She’s cerebral. She has a great IQ for the game. I think what separates her is her love for the game. You feel it when you are out there with her. She will will you to win. I’m excited to have her the next three years.”