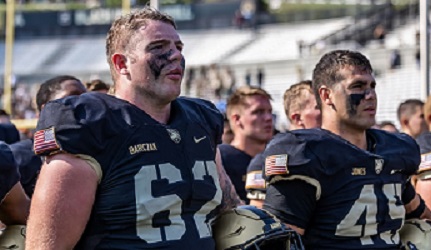 Sam Barczak runs his head under cold water before every Army practice.

Barczak flips the switch and leaves what happened during a busy day at West Point behind to focus on football.

“For me, I feel that it’s a mental game especially here at West Point,” said Barczak, a senior offensive lineman. “It’s not easy. I don’t know the last time anybody had an easy day. But, I’m a really positive guy and I try to spread that to the team because there’s no reason to bring anyone else down. Not that I’m going to be a hater or anything like that. But, there’s no reason to bring anything but positivity when you come up to the stadium and energy is contagious.”

Barczak is one of the energy guys on Army’s offensive line. He brought that energy from the initial snap against Villanova Saturday, making his first college start at right guard. Barczak, the fifth different Army offensive linemen to start their first game this season, played 47 of Army’s 56 snaps in a 49-10 win.

“I really wanted to make my mom (Ann) proud when I came to West Point and her getting to watch my first start (on televison), it meant a lot to me,” Barczak said. “It was really fulfilling. I love football as much as anybody else but (it’s) just making me mom proud.

Barczak admitted getting “the chills” before his first snap. Playing alongside senior center Connor Bishop and junior Connor Finucane, who moved from right guard to right tackle, relaxed Barczak.

“I was just going to go out there and treat it like it’s practice,” Barczak said. “I’m going to play fast because that’s how they do it. They are every day guys. I don’t want to say comforting. I don’t want to give them a big head but it was cool to be out there with two of my best friends.”

Barczak’s passion for the game doesn’t stop during a bye. He was back out there, firing up his teammates this week. He said one of his favorite moments of his first start was seeing sophomore Will Jeffcoat receive his first college snaps replacing him in the fourth quarter.

“There’s no reason to bring anything but positivity when you come up to the stadium and energy is contagious,” Barczak said. “It’s an old saying but it truly is. You come out on that practice field and you are screaming, somebody is going to follow you and another guy is going to follow him. It’s about caring for each other and helping out the brotherhood.”

Here’s a breakdown of Army’s 56 offensive snaps (from DVR, interview with Sam Barczak below):