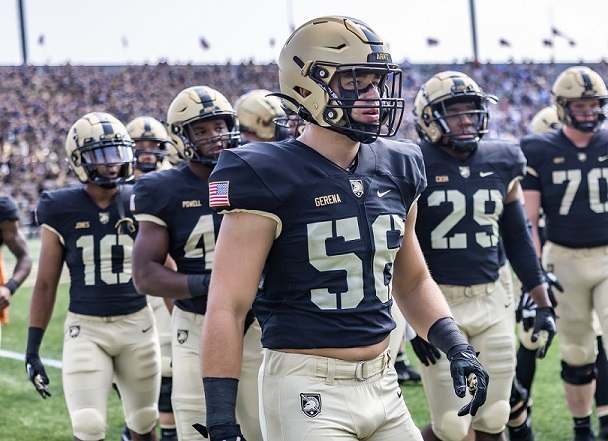 Brett Gerena opened his eyes and reality hit him in front of 32,000 fans at Michie Stadium.

Gerena had dreamt of making impact plays for Army as a kid. The Black Knights were the second-generation Army football player’s favorite college team.

And, there Gerena was, celebrating his first college sack during Army’s 49-10 win over Villanova Saturday. Gerena described the moment as “surreal.”

“You think back to the time you are younger and you are like, ‘Wow, we did it.’” said Gerena, a sophomore linebacker. “I think every kid especially when they are younger dreams of playing football at the big level at college of the NFL. But, not a lot of people can say they are playing football at their dream school. My whole life, it’s always been Army. It’s been Army, Army.”

The moment had special meaning with his family sitting the Michie Stadium stands. Gerena’s father, Joe, was Army’s quarterback from 1998-2000.

“It’s funny, my dad never really pushed me either,” said Gerena of his decision to play for Army. “He said, ‘I’ll support you on any decision that you make. Either way, your family will be your biggest fan no matter what.’

Gerena believes his passion and play led to defensive coordinator Nate Woody designing a package for him as a blitzing linebacker this season. He was making plays in the spring including a Pick Six interception in the Black Gold game and the preseason. Gerena started camp with the scout team. He was one of most vocal players and biggest hitters during a preseason scrimmage last month.

“I know coach (Jeff) Monken really harps on things like attitude and effort and I feel like I’ve shown my attitude and effort throughout the whole preseason,” Gerena said. “I can only control what I can control. But, I’m very happy to be in the position where I’m at.”

“When I first came in here even though I went to the (Army) prep school, you are still like a lost dog,” Gerena said. “You are looking around making sure you are not late to things and you feel vulnerable with your bald head…I really felt like they treated me like a little brother and as a family.

“Once I got to that role now being a “veteran,” you felt what these freshmen are feeling. You don’t want to be rude so you have to help them but also keep them in their tracks and let them know the role they have on the team. But, all around, you are looking after them no matter what. You are their big brother.”