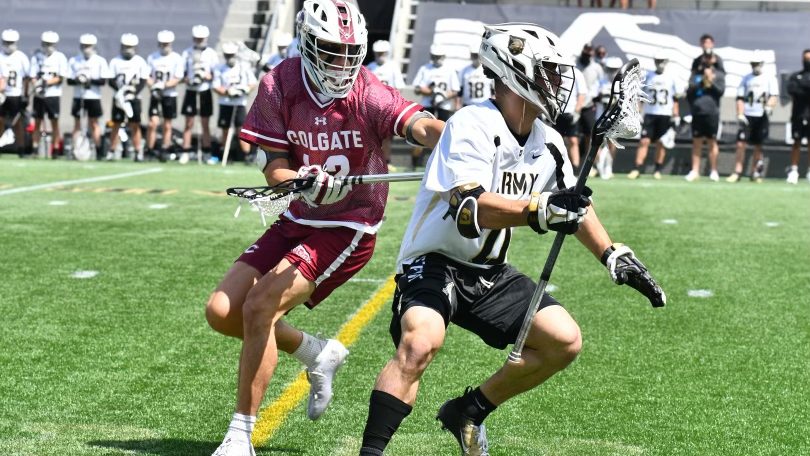 Brendan Nichtern recorded eight points for the third time in his career including a goal with 21 seconds as Army defeated Colgate 13-11 and clinched the Patriot League North Division title at Michie Stadium in West Point.

Nichtern scored three goals and added five assists and the Black Knights (7-3) earned the second seed in the Patriot League tournament. He assisted on three straight goals late in the third quarter and early in the fourth quarter as Army built a 10-7 lead.

Nick Edinger and Gunner Philipp each scored two goals and Stevie Grabher picked up a career-best 15 groundballs and won 14 out 27 faceoffs as Army won for the 10th straight time at home. Wyatt Schupler stopped 13 shots, Aidan Byrnes had a goal and an assist and Paul Johnson scored his first goal of the season. Nine different players scored for Army.

“This is a huge win for us,” Army coach Joe Alberici said. “To get the victory we would get a bye and we looked at as a playoff game and Colgate came out and looked at it as a playoff game as well, so no quit in the them and I give them credit and they played really hard. I was very proud of our guys. I thought they really responded in the fourth quarter after things weren’t going our way in the third.

Alberici added, “Brendan Nichtern was a dominate player for us. He had a huge one for us at the end. We cleared everyone out and let him go and he made the play. Very happy with the win, but certainly have some things to work on, but it’s nice to have that bye.”

The Black Knights will play the quarterfinal winner of Navy and Loyola on May 7 at Lehigh.