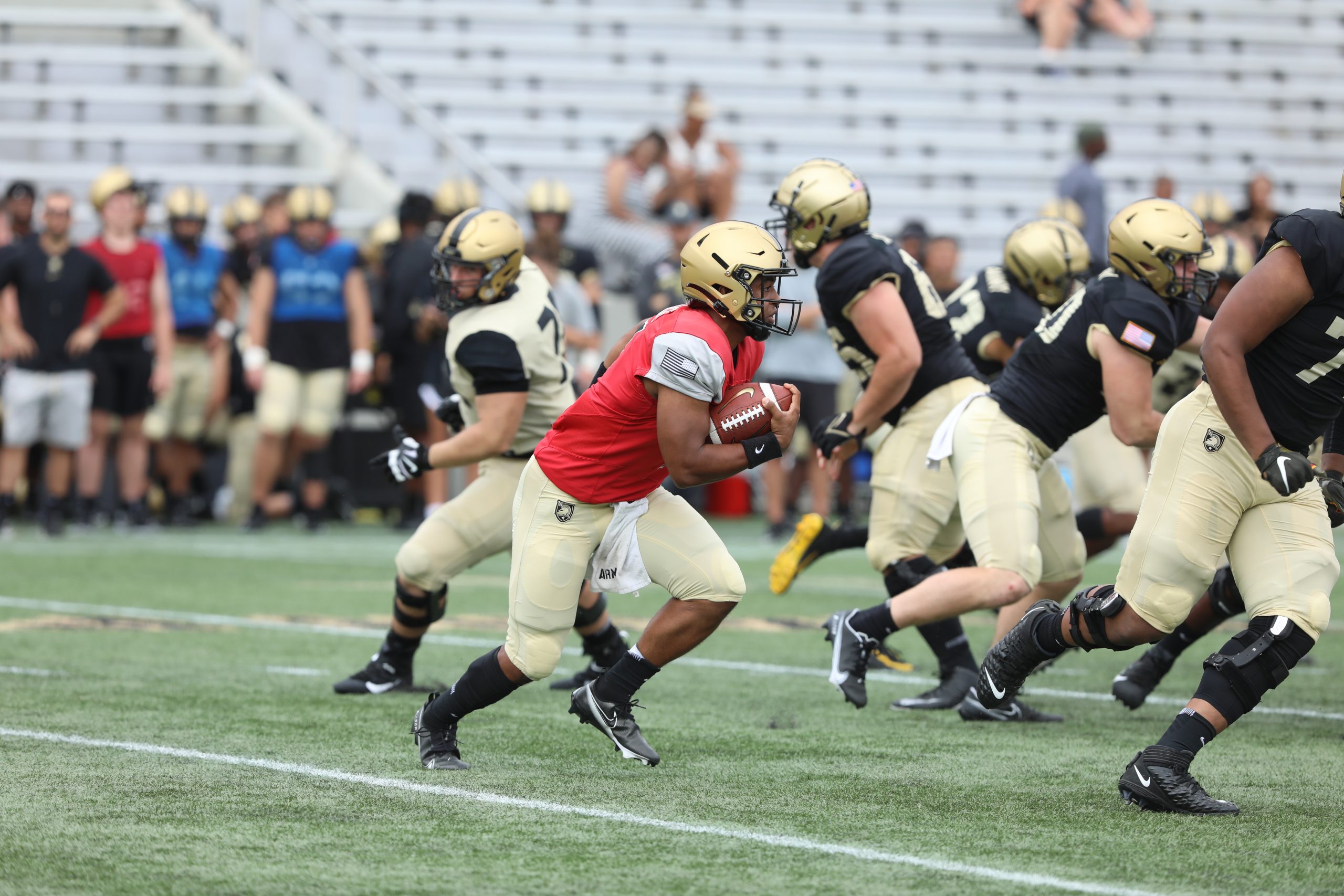 Jones’ first snaps under center came when he was five years old.

But, the Colony (Texas) high school star didn’t feel like he was starting to master the position until his arrival at West Point.

“Going into high school, you start learning some little things about the defense,” said Jones, an Army junior. “I’m going to be honest with you it didn’t really click for me until college and until I started digging into film and working with the coaches of truly understanding the game and how the offense works and how it must execute against a certain defense.”

Jones switched from a high school spread offense to Army’s option base. A year at Army Prep would help in the change. His Army Prep position coach? Former Army quarterback Ahmad Bradshaw, who led the Black Knights’ resurgence in 2016-17.

“I was able to pick up a lot of tips from him as far as footwork, reading defenses and understanding the offense,” Jones said of Bradshaw. “It made my transition here a little easier.”

Jones added, “Really learning from guys like Kelvin Hopkins, Jabari (Laws) and Christian (Anderson) when I was a freshman, definitely helped me out in being more comfortable with my footwork and reads in the option game. it’s been a process. It definitely didn’t come easy. I feel good about what I’ve learned and I’m thankful for the guys being there for me.”

Army coach Jeff Monken hasn’t named a starting quarterback for his team’s season opener at Georgia State Saturday. And, Monken may not publicly reveal his choice to keep Georgia State guessing. Jones was one of four returning quarterbacks that won a game as a starter last season. The return of senior Jabari Laws from a knee injury added to the quarterback competition that included Tyhier Tyler, Christian Anderson, Cade Ballard and Maurice Bellan.

Monken said that Tyler and Anderson are “probably at the top of the depth chart” with Jones, “a very close third” after Saturday’s scrimmage.

“It’s competitive but we are true about saying it doesn’t matter who is in that role,” Jones said. “We all support each other equally and we still compete with each other. The competition is still there. There’s no animosity between anyone like, ‘This guy should be starting.’

“We all support each other and it’s genuine. It’s been like since the winter when we knew it was going to be a competition. We hear about it every day. We just support each other on every single rep at practice. We watch film and we learn with each other. There’s really how’s it been. Nothing more. Nothing less.”

Jones impressed in his first career start, rushing for 138 yards and two touchdowns against Abilene Christian last season. He became the first Army quarterback since A.J. Schurr in 2015 to rush and throw for a touchdown in back-to-back game the next week against The Citadel. Jones injured his ankle in the fourth quarter of The Citadel game and missed the rest of the season.

“It was crushing,” Jones said. “I think anyone that deals with an injury, it’s pretty devastating. I didn’t expect it would take that long for my (recovery) process. That’s just how it worked. You go from being the guy and you go from sitting out and sitting behind and not being able to dress out because you’re hurt. That hurt.

“We are a close-knit group in the quarterback room. I truly don’t think I would have been able to get through that injury without the guys by my side encouraging me to get better every single day.”

The camaraderie in the quarterback room has also made Jones better at his position. Jones said he has taken a skill from other Army quarterbacks and added it to his game.

“You can learn something from every single guy in that room,” Jones said. “With me being a junior, it was fortunate enough to have those guys (Tyler, Anderson, Laws) with me since I was a freshman and to just be able to learn some footwork, something mentally about the game or something about the defense.

“I’ve been able to take something to each and every single one of those guys in that room. It’s been healthy competition. There’s no animosity between any of us and we understand we need each other at the end of the day. We all work with each other, watch film together and everything has been good.”

Whether Jones starts or comes into the game later (Monken has said Army is likely to use multiple quarterbacks in games), he’ll be prepared.

“We all have a role to play on the team,” Jones said. “All I can do is come out every day and work hard and be the best version of myself that I can be and help the team out in any way possible. That’s my focus now being one percent better every single day and everything else will take care of itself.”