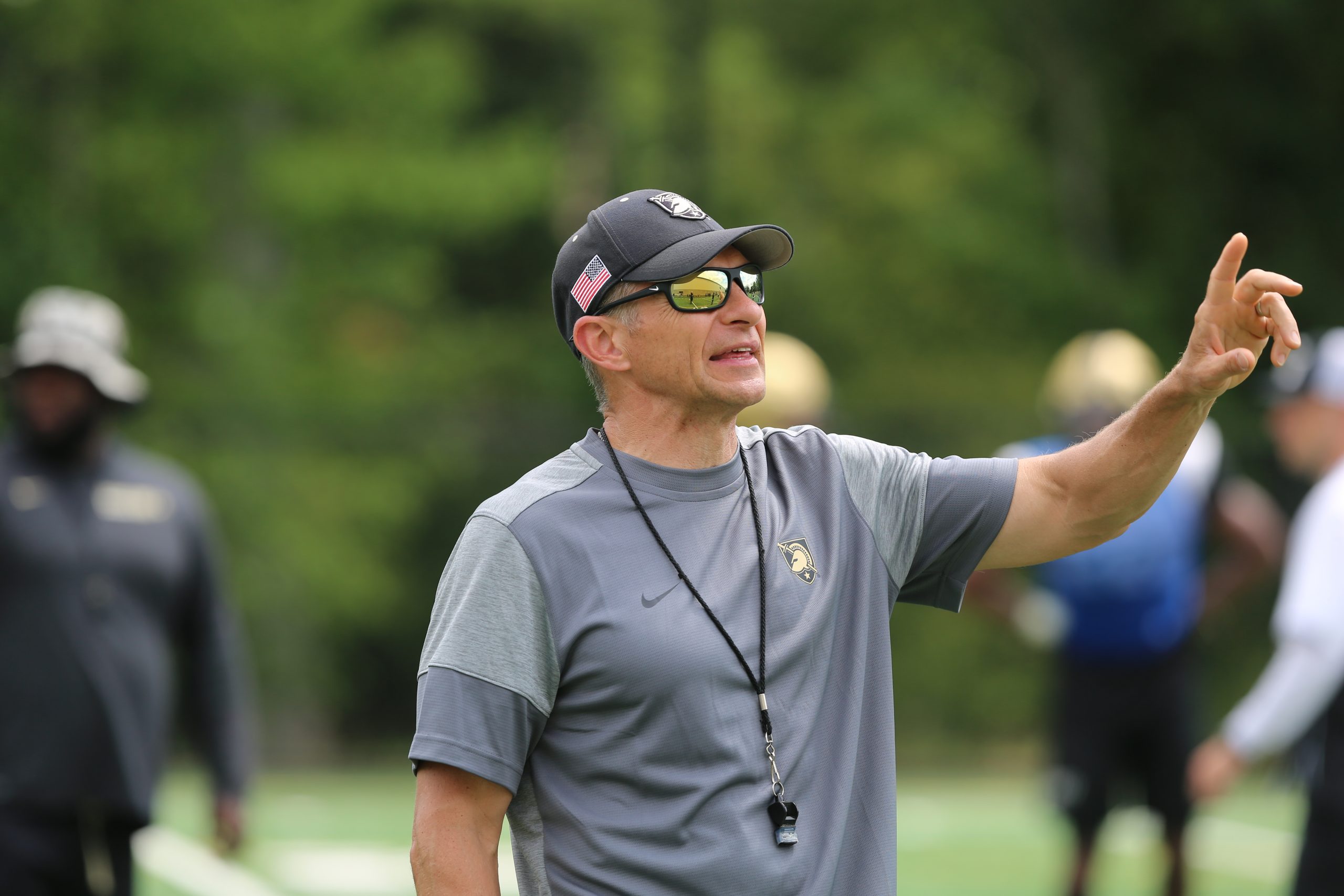 It’s been a safe guess that one of first few questions during Jeff Monken’s preseason media briefings would be about the quarterback competition and Army’s starter.

Monday’s presser conference was no different ahead of the Black Knights’ season opener at Georgia State Saturday.

Monken isn’t tipping his hand. Nor should he. He did repeat that Tyhier Tyler and Christian Anderson are at the top of the depth chart.

“I don’t what we’ll do,” Monken said. “It doesn’t matter. There’s been a lot of people asking about that. People really get bent out of shape that I don’t want to name a quarterback. But, who cares. Who cares who the quarterback is, who the left guard is or the field corner or the punter. They have to perform and if we feel that they are good enough to help our team that we are going to trot them out there and play. I don’t know what it really matters. I promise you we’ll have a guy in at quarterback.”

Monken said Army will hold its last full pads practice this afternoon before Saturday’s kickoff and that sophomore inside linebacker and projected starter Spencer Jones will participate on a limited basis. The plan is to add more to Jones’ day throughout the week and with the thought of, “getting him back up to full speed.” Jones has been banged up and held out of some of preseason camp.

“We anticipate that he’s going to be healthy and ready to play on Saturday,” Monken said. He’s had a lot of practice time just as a player here through the course of his first year and through spring ball. Unfortunately, he missed some of this preseason camp. It’s important that we get him healthy so it’s not an injury that’s going to be nagging week in and week out throughout the year.

Army will bring two kickers – sophomore Quinn Maretzki and junior Cole Talley – on the Georgia State trip, Monken said. Maretzki finished the 2020 season as the Black Knights’ top kicker his freshman year. Talley has kicked well in the preseason after not playing last season. He made 1-of-3 field goals and 19 of 20 extra points as a freshman in 2019.

“It’s been a real battle between (Talley) and Maretzki all preseason camp,” Monken said. “We haven’t decided how we are going to utilize both of them yet this week – if one guy will handle all of the duties or one be a kickoff and one be PAT/ field goal or how that’s going to shake out. I think they have both had a pretty good preseason.”

“That may be the extent of our young guys for this game,” Monken said. “I anticipate over the course of the season we are going to have some guys that will start to improve and work their way up the depth chart and maybe overtake some guys who are on the travel squad but right now, it’s a much more veteran group but I feel that’s probably to be expected this early in the year.”

Monken’s press conferences, which were held on Tuesdays in the past, have been moved to Mondays at 1 p.m.