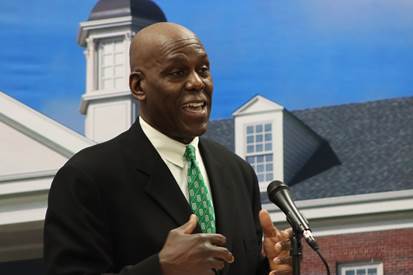 The catch is the team’s roster will be made up of mostly military service veterans.

Mitjans gets his opportunity to lead a program for the first time in over 30 years of coaching.

“It’s an honor and a privilege to be the startup coach for this new team,” Mitjans said during a press conference Tuesday. “I know this is going to take a lot of work. This is not my team. It’s our team. It belongs to the whole TU family and the whole Thomasville (Ga.) community. If we recognize that, we’ll be successful.”

Mitjans was the cornerbacks coach at The Citadel for the last six seasons after holding the same position at West Point during 2014 and 2015. He was a member of Jeff Monken’s initial staff at Army, following the coach from Georgia Southern. Monken endorsed Mitjans’ hire in a Thomas University press release.

Thomas University will start as an National Association of Intercollegiate Athletics program and plans to move to the Division II level in the future and then potentially join Division I-AA school (FCS). Current military students and ROTC high school students may also make up the team’s roster.

“It’s an awesome opportunity to work with military men who every day put their lives on the line for us to keep us safe and to keep this country free,” Mitjans said. “They give me and these coaches that we’re going to have on campus the opportunity to do what we enjoy. Why not give them the opportunity to experience something they enjoy during these two, three or four years that they will be with us while earning a degree? It will be an honor to coach these young military men.”

Mitjans started his coaching career at his alma mater Northeastern. He’s also participated in the NFL’s minority internship program with the Jets (1994), Rams (1999-2000) and the Chiefs (2001).