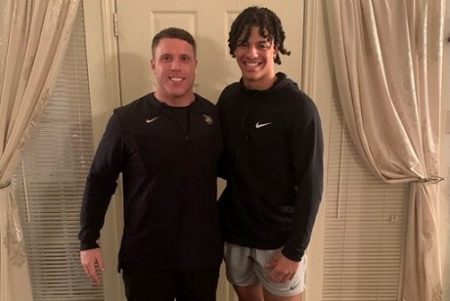 Tay Andrews felt a positive vibe from Army the first time that he spoke with assistant coach Mike Viti.

Conservations with Viti and other members of the Black Knights’ staff led to an offer for the Lockhart (Texas) wide receiver earlier this month.

Just a few weeks later, Andrews was ready to make his college decision ahead of a home visit from Viti. Andrews announced his commitment to the Black Knights Sunday. He called Viti Tuesday with the news. Viti stopped by Andrews’ home Wednesday.

“The opportunity to be a part of a great program led by a great coach with such genuine people and a chance to win big games was part of what led me to my decision,” Andrews said. “When he (Viti) spoke about West Point, I could tell that was the place for me and when he came to my house the other day, our back and forth was genuinely great.”

Andrews, who was recruited and offered as a preferred walk-on by Oklahoma State, led Lockhart with 40 catches, 580 yards and seven touchdowns. The 6-foot-3, 195-pound receiver already seems to be embracing the role of his position in Army’s running offense.

“I think the barbaric style of offense is awesome and I think since there’s such a run-heavy approach, defenses will stack the box and I’ll be able to sneak over the top often being matched up 1-on-1,” Andrews said. “I’m looking forward to being a part of it.”

Andrews is the 20th Texas commit in Army’s 2022 class to our count. He knows future teammates and fellow commits Charlie Barnett, Jaden Leonard and Trent White among others. Andrews plans on visiting West Point as soon as possible.

“I was considering (Oklahoma State) for sure along with William & Mary,” Andrews said. “But, I knew West Point was the place for me.”