Cole Caterbone practicing to play both WR, slotback this season 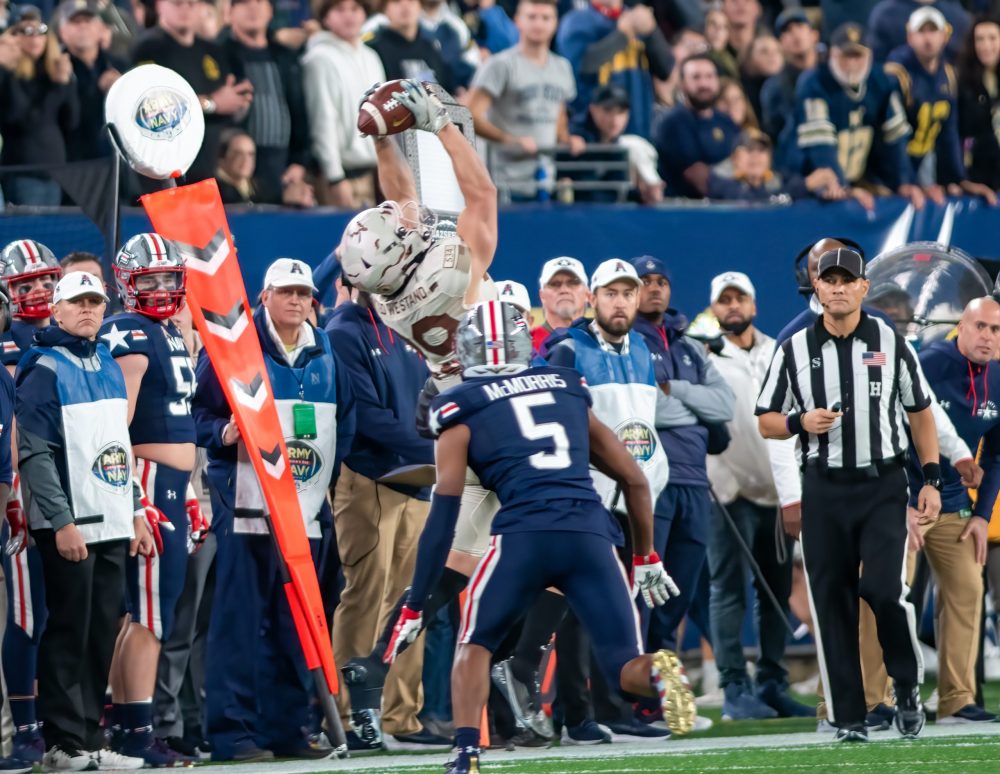 Cole Caterbone gravitated toward the slotback position when watching Army football games during his recruiting.

Caterbone’s receiving skills caught the attention of Army’s coaching staff out of St. Thomas Aquinas (Fla.) High School. But, Caterbone has always been intrigued about the prospects of playing slotback through his first three seasons at West Point.

The junior wide receiver is getting a look in the Black Knights’ backfield in his final spring. Caterbone is “cross training” at slotback with the idea of potentially playing both positions in the fall. Caterbone had five catches (tied for third on team in 2021) for 45 yards last season. He hasn’t played running back since middle school.

“It gives us a chance to get him in the game more and get him more involved,” said Army coach Jeff Monken during his media briefing Wednesday six practices into spring football. Monken suggested the move to Caterbone prior to spring ball. “He’s a really good football player, tough and physical. His body style and skill set will allow him to play both. It’s not often you have that but he’s the perfect candidate.”

Caterbone isn’t the only Army players, trying a new position this spring. Junior Maurice Bellan is making a successful transition from quarterback to slotback.

Freshman Bo Kite, a linebacker last season, switched to tight end for the first five spring practices and was moved to fullback Tuesday.

“We tried to play him (Kite) at linebacker this fall, he was on the scout team and I think he felt a little out of place,” Monken said. “He practiced at tight end and it’s just not natural for him being a high school quarterback.

“He was a champion wrestler in high school. He’s a very physical player and we put him at fullback and he just looked a lot better. I’m excited to see him over the next couple of weeks and how he can come along going into that spring game (April 22) and find out if he can be a guy that can help us.”

Freshman Bo Kite, a linebacker last season, switched to tight end for the
first five spring practices and was moved to fullback Tuesday.

Quarterback competition: Monken said it’s going to be hard to beat out Tyhier Tyler for the starting quarterback spot. Tyler’s experience and “his ability to be a runner has got him at the top right now.” Monken also said Tyler is “throwing the ball well” in the spring.

Cade Ballard and Jemel Jones, who both have starting game experience, round out the top three on the depth chart. Monken said Jones, who has battled injuries the last two seasons, “has to improve with his consistency in performance.

“He certainly from a physical standpoint is capable of being our starting quarterback,” Monken said. “I don’t think he’s hit his ceiling yet and he can still improve.”

Good spring: Sophomore Jimmy Ciarlo has impressed Monken on and off the field. Ciarlo is in line to replace Malkelm Morrison at the hybrid apache position.

“He’s really serious about football and has really stepped up as a leader,” Monken said. “It’s fun to see a guy grow up like that.”

Injury updates: Freshman fullbacks Lucky Brooks and Jarel Dickson are both missing the spring with undisclosed injuries. Freshman defensive end Andre Miller is working through “a few injuries” during the spring, Monken said.

On the rise: Monken mentioned freshmen linebacker Kalvyn Crummie and Tyler Rafferty and freshman defensive end Kyle Lewis as among the young players, who are showing improvement in the spring. He suggested that Crummie has the ability to follow the path of past linebackers Arik Smith, Cole Christiansen and Andrew King and start his sophomore season.

Coaching transition: Monken said he,” feels as good as where our staff is right now as I have in a long time” with five new assistants and Mike Viti moving from fullbacks to offensive line coach. The learning curve for the new coaches is more than the players, Monken said.

“Schemes haven’t changed,” Monken said. “It’s just these new coaches learning those schemes and learning to coach those details and fundamentals that go with it that takes some time.”